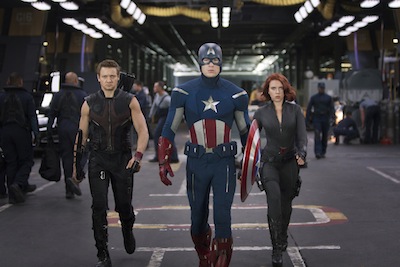 Avengers Assemble, the latest film adaptation of the Marvel comics universe, is taking global box office by storm, or, more to the point, is properly Hulk-smashing its way to the top.

With staggering $200.3m (£124m), it is the biggest US opening to date and it tops the UK box office for the second week in a row, already surpassing the takings of entire runs of previous Marvel films.

Avengers is also the second Hollywood film by Joss Whedon, creator of iconic TV series Buffy the Vampire Slayer, who in his recent Observer interview explains his fascination with powerful women with the influence of his extraordinary radical feminist mother.

Despite all the chest-thumping hyper-hetero-masculinity, superhero flicks are not (and perhaps have never been) male-exclusive, neither in their cast nor in target audience. Reviewing Avengers Assemble for us, Sophie Mayer, a die-hard Whedon fan, is wondering whether strong female characters are the only thing to look out for while watching it.

“These days, you can tell whether to like a mainstream film by the people it pisses off,” writes Sophie. “With riffs on the need for sustainable energy, minimising interventionist US politics (and avoiding human casualties), weapon non-proliferation and the underlying argument that violence begets violence, there’s no doubt that Avengers is going to piss off all the right people for me to like it.”

The film is still playing in the cinemas nationwide so you can decide whether you want to read Sophie’s review of Avengers Assemble before, after or instead of seeing it!