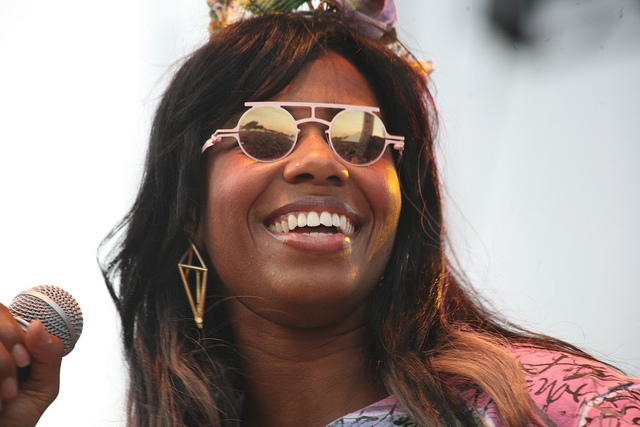 It’s been four years since songwriter, record producer and performer Santigold released her debut self-titled solo album (or, rather, Santogold, as she was known at the time). As Cazz Blase points out in the review we’ve just published, Master of My Make Believe is arguably a worthy successor. With Santigold’s debut album possibly serving as “a rather quaint reminder of pop before the explosive arrival of Lady Gaga“, Master is perhaps a more angry affair swerving away from the mainstream pop that has now caught up with Santigold’s sound.

Here’s an excerpt from Cazz’s review:

…The album opens with ‘Go‘ and within seconds the listener is running to keep up. This is a statement of intent to dance to. Scattergun lyrics are delivered in a post punk staccato manner: “People want my power, and they want my station. Stole my winter palace, but they couldn’t take it.” This song was among those leaked online last year and features a tremendous, imperious and icy Karen O (Yeah Yeah Yeah’s, Karen O and The Kids). It is a sterling tour de force with vicious, hammering beats that are not to be ignored or denied.

First single ‘Disparate Youth‘ is crunchy but strikes an easier pace. The post punk minimalist guitar samples enhance the mood of restlessness: “They said our dreams would carry us, if they don’t fly we will run” and “They know that we want more, a life worth fighting for” suggesting a younger generation talking to an older generation, in slightly world weary tones. It feels like Donna Summer’s ‘State of Independence‘ without the evangelical optimism. Or perhaps ‘State of Independence’ meets The Specials ‘Ghost Town‘ for the modern age. The video can only be described as Indiana Jones meets Lord of the Flies. Make of it what you will…

Picture of Santigold performing at Austin City Limits 2011 by wfuv, shared under a creative commons licence. This is a close-up of Santigold (against a light, possibly outdoor, background) looking out at the crowd, smiling. The microphone in her right hand is just in shot in the bottom left corner. She is wearing round dark glasses

YouTube clips show Santigold performing in the BBC Radio 1 Live Lounge in May 2012.