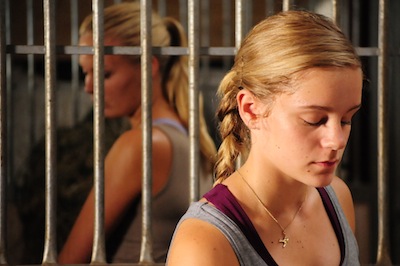 She Monkeys opens in London and Dublin

Swedish director Lisa Aschan’s last year’s début feature She Monkeys (Apflickorna) is coming to selected London cinemas on Friday 18 May (and to the Irish Film Institute in Dublin a week later).

Bringing to mind films like Céline Sciamma’s 2007 Water Lilies (ah, the joys of swimming pools!) or Catherine Breillat’s 2001 À Ma Soeur! (oh, the perils of having an older sister!), Aschan’s film remains fresh and original in its depiction of rivalry between two young female equestrians. The constantly tipping power balance and palpable sexual tension between the girls lead to unexpected twists and turns of the plot, making it a gripping viewing experience.

I reviewed the film for The F-Word last year so you can have a read here if you need more encouragement. WARNING: the review gives away some of the plot (but does not, arguably, contain any major spoilers).