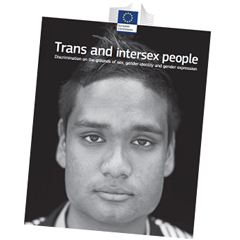 New EC report: “Discrimination against trans and intersex people on the grounds of sex, gender identity and gender expression”

This study highlights the obstacles and negative attitudes faced by this community and the difficulties with regard legal recognition and rights. The report also extensively examines the influence of EU law, including case law, on trans discrimination and provides case studies of national legislation and case-law on gender identity and gender expression discrimination of some Member States where there are promising approaches which can and should serve as models for others to follow.

Via the European Parliament’s Intergroup on LGBT Rights:

I warmly welcome this new report. It’s as thorough an analysis one could hope for, and a very powerful contribution both legally and politically. Trans and intersex persons’ fundamental rights are the same as everyone else’s, and they deserve to be free from discrimination.

Ulrike Lunacek MEP, the other Co-President of the LGBT Intergroup, continued:

While I also broadly welcome this initiative, I do wonder how some intersex activists will feel about having their concerns conflated with those of trans* people. In some quarters, it has long been held that the two groups have quite separate concerns in some crucial areas, and it remains to be seen how the report will be received in the wider communities.

Download a PDF copy of the report (in English) here. Online and printed versions in French and Spanish are expected to be published shortly.