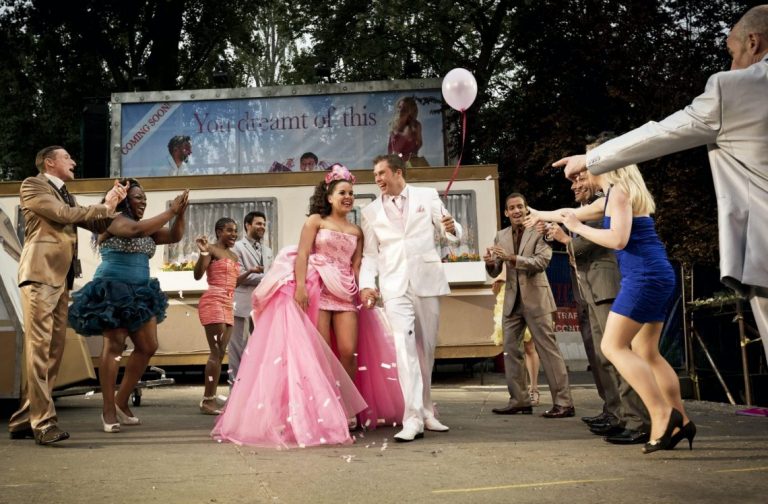 Most of Shakespeare’s A Midsummer Night’s Dream takes place in a forest, so it’s an obvious choice for the Open Air Theatre, a charming venue that opens each summer in Regent’s Park. Fortunately, on the night I went, we were spared rain, though be warned that performances go ahead during all but the most torrential of downpours. However, the sky above us and the expansive space added to the experience and complemented the production, which had an energy and busyness about it that was constantly engaging.

The Dream tells the story of four young Athenians. Hermia and Lysander are in love, which would be fine, except that Hermia’s father wants her to marry Demetrius. Meanwhile, Hermia’s friend, Helena, is infatuated with Demetrius, who only wants Hermia. Hermia and Lysander decide to run away together at night, and are pursued by Demetrius and Helena. The lovers wander the forest, unaware that they are now in the realm of Oberon and Titania, noble fairies. When Oberon becomes aware of the situation, he decides to intervene to help love along – though, of course, things don’t go quite as planned.

With a play as often-produced as the Dream, the pressure is on the direction and interpretation to make it new and to emphasise different sections and messages. Although I enjoy traditional Shakespeare, I love it when a production gives an unexpected slant, putting the action within a different community, era or political circumstance, and demonstrating the universality of human experience. This is a comedy, so the universal human experience here is love – and why would that be an emotion exclusive to the Duke of Athens and his cohorts?

However, I found this production’s interpretation uncomfortable. Here, the lovers are part of the travelling community. There are two caravans onstage and the word “pikey” is graffitied onto a van in case there was any doubt. There is nothing wrong the basic decision that the nobles should be travellers, but it soon becomes clear that the characters are caricatures. In fact, I wonder how much inspiration was taken from My Big Fat Gypsy Wedding, a television show that has attracted criticism for its racist and simplistic presentation of Travellers? The wedding scene could have been lifted from an episode, with Hermia and Helena each parading onstage in garish, flamboyant wedding dresses, only to be outdone by Hippolyta’s ridiculous ensemble, with a skirt several metres wide. This is only inviting the audience to laugh at the characters, not empathise with them, and by linking the characters’ petty and tasteless actions to their community, the production encourages an us and them narrative. It was slick with snobbery.

There is nothing wrong the basic decision that the nobles should be Travellers, but it soon becomes clear that the characters are caricatures

A disturbing theme in this production was violence against women, particularly within relationships (and again, this violence is shown most prominently in the Traveller characters, though it is spread more widely). This is apparent from the pre-set, where, before the show officially starts, the actors are busy on stage, setting the scene by going about everyday actions. The actor playing Hippolyta is made-up with a black eye, as well as sporting a bandaged wrist and ankle. In the first scene, Theseus tells her, “I woo’d thee with my sword”, which appears to be the textual justification for showing him hurt her for the rest of the play. Shakespeare is referring to the fact that Hippolyta is an Amazon, a strong warrior woman who first encountered Theseus in battle, but this production discards this idea in favour of showing domestic violence. The scene in which the mechanicals perform Pyramusand Thisbe for the wedding guests is normally one of the funnier parts of the play, but it took on a much darker tone in this production, as Hippolyta and Theseus’ interjections were transformed into threats and accompanied by warning glances, swipes and cries of pain.

This violence extends to the lovers. We see Demetrius dragging Helena along the ground, and later Demetrius and Lysander restraining Hermia. Perhaps there is textual justification for increasing the violence as the relationships disintegrate in the forest, but when the couples are reunited, their violent recent history can be seen as a foreshadowing of Theseus and Hippolyta’s toxic relationship. The fact that Hermia headbutts Demetrius at one point in self-defence does not make anything better – firstly, because increasing the violence of women against men is hardly the equality we want, but also because this is a more comedic moment, whereas it is clear that the men have real power to harm their partners, and are only stopped on some occasions by the interfering fairies. 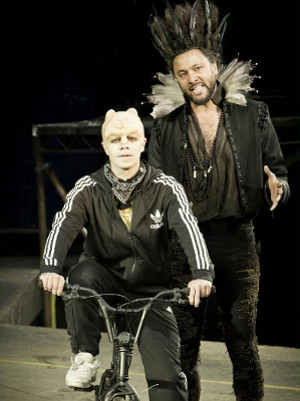 The fairies, meanwhile, are not immune from this trope of violence. Oberon and Titania are a pretty feisty couple in any production, but here, Oberon’s anger over Titania’s refusal to give up a boy in her service manifests itself in violence. In this production, as in the text, it is pretty clear that the boy should rightfully be in the care of Titania, as she was close to his mother who died giving birth to him. When Oberon grips Titania’s arms tightly and goes to choke her, his disproportionate reaction shows his propensity to resort to violence. It also makes his plan to make Titania fall in love with an inappropriate object of affection (in this case, Bottom transformed into an ass) sinister rather than playful.

Shakespeare’s attitude towards women is subjected to a lot of debate. The Dream is not exactly the epitome of feminist thought, regardless of the production. It’s a play centred around love, and as one might expect, this means that the female characters don’t have much to say that isn’t about their male partners (to be fair, this swings both ways, though there are male characters who aren’t lovers as well). Hermia and Helena have a tremendous fight over Demetrius and Lysander, which no production can easily avoid. And, of course, the whole premise of the play is that Hermia wants to marry Lysander, but can’t because her father wants her to marry Demetrius, and it is decreed that she must either bend to her father’s will or become a nun. However, 400 years after Shakespeare’s death, directors have shown that there are any number of ways to present his works in a more equality-friendly way, whether you switch up the characters’ sexes, change the setting or even add a note of sarcasm to a particularly problematic line. I felt that in this production, the choices all served to make the play less progressive.

Those choices aside, it is worth highlighting some of the better aspects of the production. The set was exciting, transitioning between scenes in interesting ways. One of the caravans is lifted up by a crane to reveal a woodland pond; another opened up into a flowery hill. The ensemble cast was strong, with the smaller characters and extras doing a lot to add to the atmosphere. Rebecca Oldfield’s Helena was particularly noteworthy, as she had a knack for making Shakespeare’s words sound like modern English, and completely appropriate to her character, whereas a couple of other actors pronounced their lines in the Queen’s English, which didn’t fit the setting at all.

The company of actors did a good job, and the production was engaging. However, the choice of direction let the production down badly. There were too many moments reliant on violence against women or lazy stereotyping and these came across as gratuitous. Ultimately, I felt that Helena said it best when she implored Hermia to stop her actions: “‘Tis not sisterly!”

A Midsummer Night’s Dream runs at the Open Air Theatre until 5 September. Accessibility details can be found on the theatre’s website.

Megan is the theatre and arts editor for The F-Word.