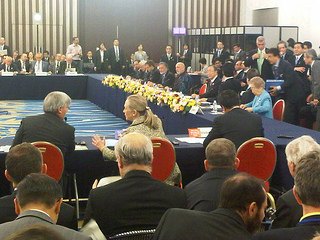 Did the Tokyo Conference deliver for Afghan Women?

The same day that delegates from over 70 countries convened in Tokyo to discuss future aid to Afghanistan, Reuters released footage (trigger warning) of an unnamed 22 year old woman being publicly murdered for ‘adultery’ by a man believed to be a member of the Taliban. A cruel reminder, yet again, of how precarious any advances on women’s rights in the country since 2001 are.

Without this footage, Sunday’s meeting in Tokyo might have been considered a relative success. There was a welcome increased focus on women’s rights, compared to previous international meetings on Afghanistan for example: the official declaration (pdf) from the conference is peppered with references to women’s human rights and to their constitutional rights to equality with men. The declaration even – and significantly – confirms that tackling violence against women is a priority for the international community via a specific indicator on the implementation of both the 2009 law on the Elimination of Violence Against Women and the National Action Plan on Women in Afghanistan. This is a key advance, and something ActionAid has been pushing for.

Yet, specific commitments on how this would be achieved are non-existent and there was apparently no clear budget allocated for tackling violence against women and girls or promoting women’s rights. As the footage makes all too apparent, lofty statements that are not coupled with dedicated funds, transparency and clarity about how implementation will happen, and some indications of how failure to implement will be handled, are of relatively limited use to the women and girls of Afghanistan that are daily facing threats to their rights and lives.

But Sunday’s footage tells us something Afghan women’s rights activists like those from the Afghan Women’s Network are all too aware of (pdf of their Tokyo Conference demands): that a radical change in approach is needed to address the real challenges in the country. Laws and policies on women’s rights are systematically not being implemented, violence against women is rampant, and pressure is mounting as we move closer to the 2014 troop withdrawal deadline. Moreover, the murder occurred just one hour outside of the capital, proving not only that the Taliban’s influence is not limited to remote areas of the country where NATO forces do not have a strong presence, but also that its influence remains set against women.

Evidently, a rethink on the security and development agendas in the country is desperately and urgently needed. Violence against women and girls is not a marginal issue. The murder demonstrates why ‘peace’ negotiations with the Taliban that do not include women in the conversations are so deeply problematic and must be stopped. There can be no peace where fifty percent of the population is not able to exercise voice or influence at the decision-making table, especially when those at the table have not proved they will uphold women’s rights. As the campaign on Afghan women’s rights says, No women, No peace.

You can take action about the murder by signing this campaign petition.