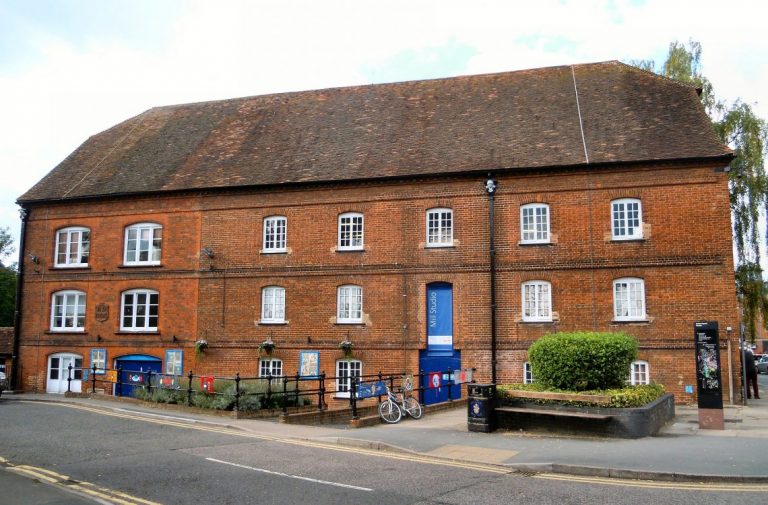 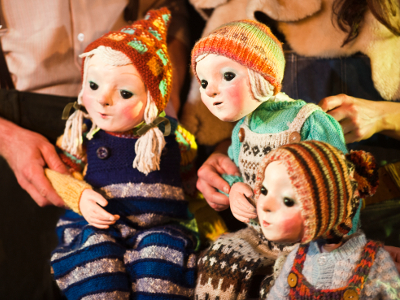 The lead character in the old Nordic tale White-Bear King Valemon, renamed for the stage The Girl with the Iron Claws, is the rebellious and charming Girl, the youngest of three princesses. She dreams of a golden band that becomes her all-consuming passion and so when a white bear shows her the band during one of her unsupervised jaunts into the forest, she agrees to go with him in order to possess it.

The bear is in fact Valemon, a handsome king, bewitched by Troll Queen to appear as a bear by day. He is still a man by night and comes to the girl’s bed in the dark. Living in his castle she has three children, each of which he takes away in order to safeguard them from the Troll Queen. The story continues with characteristic fairytale twists and turns as our heroine must take an epic journey so that she can live happily ever after.

In some ways it feels a very Scandinavian story, with vast dark forests, a melancholy white bear and a piece of knitwear, centre-stage, which would not look out of place on The Killing‘s Sarah Lund. However, the tale is actually a piece of folklore with many versions across cultures and countries. Told to writer and director Hannah Mulder one evening in a yurt on Dartmoor, it feels ancient and mythological, very much the right type of story to be passed on traditionally by the flickering light of a fire.

In the darkness of the Mill Studio at the Yvonne Arnaud Theatre in Guildford, the audience were treated to an intimate and magical performance with brilliantly integrated puppetry, silhouettes on a simple fabric screen and a peppering of songs from the four cast members.

The characters are very well developed and the performances are superb: the strong-willed lead, the hilarious waterproof-clad crones (but why must crones always be Scottish?!), the prim sisters, the ineffective king with his cardboard crown, and the lonely bear. The four actors play several characters each and also act as puppeteers – the brilliant integration of puppetry is one of the biggest joys of this production. The staging is rich with flashes of genius and its deceptively simple tools – like shadows on a screen and the cast providing sound effects – give it a satisfying depth that lifts it above simple storytelling. 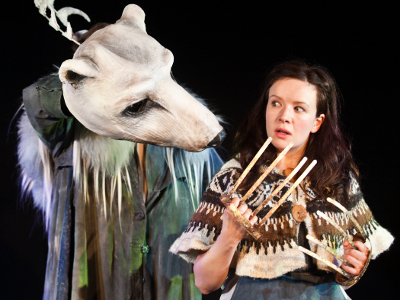 As any traditional narrative, retold many times, the tale is rich with symbolism and messages for its audiences. This is, at its heart, a coming-of-age story with clear positive messages for the audience – the importance of always trying hard and of being true to one’s self. The Girl rebels against the path set out for her by her family, showing her independence, through which she ultimately finds happiness.

Having said that, in a piece of theatre so beautifully crafted and rich with symbolism that it begs to be discussed, dissected and understood, I felt some of the messages should have been modernised. The object the Girl dreams of, desires, and even bases her life choices on – to the point where she agrees to leave the bosom of her family and run off with a bear-man – is a golden band. And, like Goldilocks at Tiffany’s, it must not be too dull nor too bright, not too plain nor too jewelled… This could have been seen as a modern take on consumerist, looks-obsessed culture, but within the scope of the play, the Girl’s preoccupation with pretty, shiny things seems to be without irony, and the moralistic framework is very permissive of her gold lust.

In addition, while it’s refreshing to have a nod to sexual maturity in a fairytale, the description of the first three years of the couple’s sex life together doesn’t sit comfortably with the rest of the play’s atmosphere, nor does the message that if the Girl questions the situation, a terrible fate could befall them all.

Survival in a community might once have meant doing your man’s bidding, unquestioningly, for years, even if that meant letting him sleep with you in darkness, labouring alone and giving up your children. But shouldn’t we modernise our fairytales, modify them in a way they have always evolved when they were told, person to person, generation to generation?

Still, in spite of a few reservations, I felt that this production packed a huge amount into an hour and all credit is due to the cast and company for an intense and enjoyable play. The first show from The Wrong Crowd certainly is an impressive debut.

The tricks and tools, brilliant as they are, should not take away from the acting in itself. Laura Cairns (playing, among others, Troll Queen) brought out many of the laughs with her physical comedy, her synchronicity with the puppet sister and her diverse accents. And as Clare Fraenkel (playing the Girl) struggled through the dark forest, I could almost feel the damp seeping into my bones – and as she came into a cabin to warm herself, for a moment I really felt transported, being told an ancient tale beside a glowing fire.

The Girl with the Iron Claws is nearing the end of its tour around the UK and Ireland; you can still see it at the Clonmel Festival until 14 July.

For more information on The Wrong Crowd visit their website.

Feature image of the Mill Studio by User:Jack1956, shared under a Creative Commons licence, via Wikimedia Commons. Images of the show in the text courtesy of The Wrong Crowd.

Greta Hughson likes people and getting things done. She works as an editor for an HIV charity and would like to be a billionaire philanthropist when she grows up. You can often find her on twitter @gretahughson