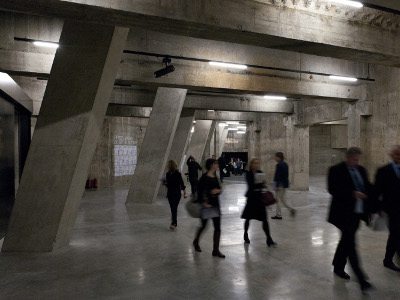 New review and interview: Suzanne Lacy at The Tanks

Caitlin Hayward-Tapp visited The Tate Tanks, the new underground exhibition space from Tate Modern, and interviewed Suzanne Lacy, whose art about aging is currently featuring there

Tate Modern has a new space: The Tanks, a series of underground chambers, specifically for showcasing live art, performance, installation and film works. The space has been launched with a fifteen week festival called Art in Action, which will be showcasing pieces and events until October.

One of the exciting things about the festival is its coverage of art created by women. Suzanne Lacy and Lis Rhodes both feature heavily, taking two of the three permanent displays. Tate Modern’s director, Chris Dercon acknowledged this, declaring The Tanks a space that “challenges the male dominance of art museums”, while curator Stuart Comer described the programme as “art based on absence, addressing the lack of visibility of women in many arenas.”

Caitlin Hayward-Tapp went to the opening of The Tanks and reviewed the space and collections featured. She also interviewed Suzanne Lacy, whose work ‘The Crystal Quilt’, about the experiences of aging women, is on display for the entire Art in Action festival.

Read the review of The Tanks here and Caitlin’s interview with Suzanne Lacy here.