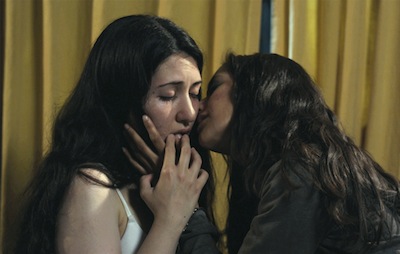 With her second feature Three Veils Rolla Selbak, Arab-American filmmaker from the United Arab Emirates now working in the US, set off to make “an inspirational film women all over the world can relate to”.

The film focuses on the deep personal experiences, normally hidden from the public eye, of three Middle-Eastern women living in the US. You can find out yourself how successful Selbak is at attaining her goal as the film gets released on DVD next week by Peccadillo Pictures.

In an interview for San Diego Gay and Lesbian News, Selbak said:

“I’m very aware that the majority of films with lesbian characters end up [having them] broken-hearted or killed off by the end. However I also wanted to show the truth; the painful truth of what a character like Amira would probably choose to do. It’s meant to showcase the grimness of the issue, and hopefully it will push people in the audience to do something about it, whether they know someone in a similar situation, or whether they’re going through it themselves.”

Reviewing the film for The F-Word our new contributor Elaine Castillo wonders about the power of films like this one to change prevailing assumptions about both women’s sexuality and the roles they play in relationships.

Elaine wishes for the audiences to rethink not only how women negotiate their desire to be happy within rigid boundaries of patriarchal environments but more fundamentally what ‘happiness’ means and can potentially mean to us.