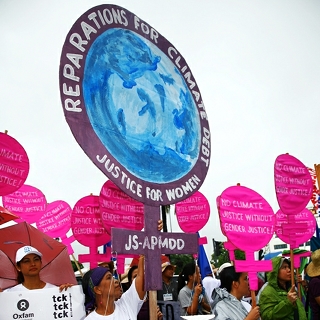 Rio is still an opportunity

Natalie Bennett was until March the editor of the Guardian Weekly, and she founded the blog Carnival of Feminists. She’s the chair of Green Party Women

As the dust settles on the disappointing Rio+20 Earth Summit, there’s one important issue that’s had almost no public airing: the place of gender in this attempt to fuse the issues of climate change and sustainable development.

At the first Rio conference in 1992, women’s issues got, for the time, a strong showing, with consideration of gender issues in Agenda 21, the Rio Declaration and new UN conventions on biodiversity and on desertification and drought. There was one important exception – the Framework Convention on Climate Change – and, while since 2009 there’s been some progress on including gender issues in climate talks, it’s still scant.

If the “Sustainable Development Goals” are to be a key outcome of this Rio, as we’re being sold, it’s critical that the blending of environmental and development concerns doesn’t see gender lost in the mix.

Women need to be a mainstream consideration for three reasons:

In progressive settings, it’s usually not hard to argue the first case. Most will accept that women, who do well over half of the world’s work and get less than 10% of income, while owning about 1% of assets, are through poverty more vulnerable to climate change.

When you explain about how – as illustrated by the Asian tsunami and the 1991 Bangladesh cyclone – women trapped by cultural pressures at home may not receive information about approaching natural disasters, will frequently have children in their care which reduce their chances of escape, and may have been denied survival skills such as learning how to swim, the gender dimension will usually be accepted.

That’s the negative case. More important, and generally less considered, is the fact the importance of women’s role in contributing to mitigation of and adaptation to climate change.

They are knowledgeable, important agents, able to contribute to both mitigation (stopping or reducing climate change) and adaptation (living with it). They know things that men don’t know. They can teach as well as be helped.

A case study from northeast Ghana (where women grow, at latest estimate, 87% of the food, and even wage workers come home on weekend and holidays to be fed, their wages being insufficient to sustain them) spoke to poor women farmers with few resources. But it found they had a very detailed knowledge of the soils and microclimates of their fields, of crop rotation, of complementary plantings – even if they mightn’t have known the technical terms. And they recognised the reality of climate change and were seeking adaptations to deal with it in their agricultural practices. That’s just one small example, to be repeated around the globe.

But most important of all, there’s the broader impact that genuine, mainstream consideration of women’s issues would have. Seeing climate change as a problem needing technical and market solutions – the traditional approach – makes it hard to consider social issues in general – and considering them might broaden the types of solutions being considered and implemented.

It’s clear that we need new approaches, new angles, new ways of thinking about the enormous problem of climate change hanging over all of our heads. Including gender is one way to move forward.

A final note: There’s a big issue around reproductive rights – which must be fought hard – but even beyond that there’s a crucial mainstream gender dimension in the Rio process that mustn’t be lost.