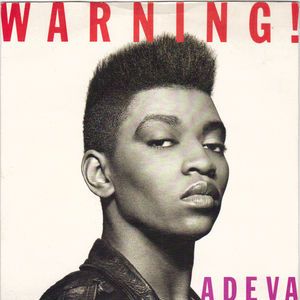 Song of the day: Adeva – Warning!

It’s easy to dismiss the rows of old albums selling for next to nothing in ethically dodgy discount stores but one old classic currently inexplicably doing the rounds for a pound is Adeva‘s self-titled 1989 Cooltempo debut. And what a classic it is, containing cowbells-a-plenty and hands-in-the-air house moments alongside gospel and synth-tinged contemporary R&B. High points, along with ‘Warning!’, include ‘Respect’, ‘Musical Freedom’ and the -later to be remixed to greater success- ‘In and Out of my Life’. (‘I Thank You’ arguably shouldn’t be included in this list, as the version appearing on the album has a lighter touch on the production that doesn’t do the song justice and is therefore not as hooky as the one released as a single or, indeed, as emotionally arresting as the later Love to Infinity mix.)

‘Warning!’ was Adeva’s third UK hit single from the debut album and the second in a sequence of three (following ‘Respect’ and preceding ‘I Thank You’) to reach number 17 in the official Top 40. The lyrics strongly hint towards the shooing off of a pushy and persistent ex but there is something about Adeva’s tantalising serving of “Please. Stay. Away. From. Me. My. Final. Warning. Is. To. You” that could easily make the song an anti street harassment anthem.

Adeva went on to record more top quality tunes fit for both dancing and singing along to, including the steely ‘Don’t Let it Show on Your Face’ and a number of tracks on her album with Frankie Knuckles in the mid nineties but it is arguably the clutch of singles from her debut album that are her most memorable.

The ready availability and general low buying price of ‘Warning’ is no indictment of its quality. This is a charity shop and carboot sale bargain that deserves pride of place in any late eighties/early nineties house collection and it also owes a large part of its splendour to the charisma of Adeva as a performer.

Video begins with an outline of Adeva emerging in a stark studio scene. This is then intercut with scenes of Adeva performing with backing dancers and singers in a more colourful studio. This has blue strip lighting and a light green backdrop featuring three large black and white on blue pictures of Adeva: a profile looking to the right, a face-on shot with dark glasses and a profile looking to the left (left to right). Adeva’s hair is short (grade one at the sides with a quiff on top) and she is wearing a tight black top under a smart black jacket with the sleeves rolled up, cycling shorts over tights, along with a chunky silver belt, bracelet, earrings and brooch plus heels. She wears dark glasses which she removes at 0.55 (on the line “be careful ’cause I’m watching you”). After the song has finished, Adeva looks at the camera and slowly points.