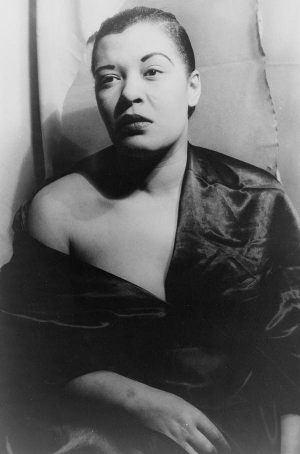 Song of the day: Billie Holiday – You Let Me Down

Billie Holiday‘s ‘You Let Me Down’ was released on Brunswick in December 1935. It would have been available at the time on ten-inch 78rpm vinyl (LP albums were a decade away) and was one of a string of records Holiday made during the year she was signed to the label. These were recorded with the Teddy Wilson Orchestra and heralded new success for Holiday, some two years after her pivotal performance, acting as a replacement for Monette Moore at Covan’s.

The song sees Holiday addressing a lover who previously put her on a pedestal and has now kicked her from it. Reflecting on Angela Y. Davis‘s analysis of this song in Blues Legacies and Black Feminism, Danielle Dirks from Soc Theory (at Occidental College) has said that Holiday invites women listeners to reflect on their own experiences of oppression. The song puts across the inherently patriarchal nature of being on a pedestal: apparently glorified but rendered passive in the process of being promised the world by another and therefore essentially disempowered (something Davis describes as the “futility of masculinist notions of romantic love”). Dirks continues:

On the surface, the lyrics, “like an angel/ fit to wear a crown/ have a car/ wearing diamonds/ put me on a pedestal,” seemingly indicate women’s “values” and “actions.” These lyrics have negative implications for women: valuing diamonds and crowns makes women seem materialistic and shallow; placing women on “pedestals” is essentially objectification; and defining “love” and “happiness” as receiving man’s appraisal and gifts suggests women’s inferiority and weakness.

Whether “Holiday’s acknowledgement of these gendered lyrics is evident in the tension and anger in her voice” and whether this tension also hints at the wider let down by white racist society is open to interpretation but there is certainly -as ever- strength and presence in her performance and this combines with the song’s stark exposure of the perils of the pedestal to great effect.

Static YouTube image shows the cover of Lady Day: The Complete Billie Holiday on Columbia (1933-1944). This features a black and white head and shoulders picture of Billie Holiday with large feathers (possibly a fascinator) in a side bun in her hair, cut out and super-imposed onto a grey background.

Portrait photograph of Billie Holiday by Carl Van Vechten. Sourced on Wikimedia Commons and in the public domain.