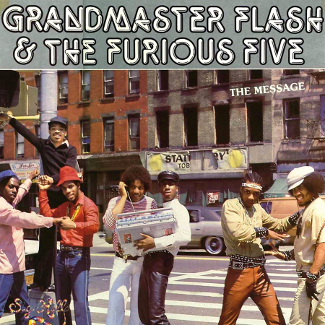 Song of the day: Grandmaster Flash and the Furious Five – The Message

In the early 1980s, before the political hip hop standard ‘The Message‘ was released, hip-hop was largely about partying. Grandmaster Flash and the Furious Five‘s hit was widely credited as the “first prominent Hip-Hop song to provide a lyrical social commentary” but was not immediately embraced by members of the group when they were introduced to it by their label Sugar Hill. Speaking about the track to NPR a decade later, rapper Melle Mel said that he hadn’t thought the record “would be pivotal either way” and was therefore shocked by positive responses to test plays in both a Manhattan record shop and Bronx club (Disco Fever), having assumed the record would result in “a lapse in the intensity of the crowd”. (According to Melle Mel, the group were used to doing party raps boasting about how good they were.)

‘The Message’ was written by Duke Bootee and the late “mother of Hip-hop” Sylvia Robinson. Sometimes using problematic stigmatising language to describe the desperate situations experienced by people living in a forgotten ghetto, it acts as a first person account of the frustration and despair experienced when being suffocated by one’s circumstances. Many of the lyrics seem particularly relevant in today’s highly aspirational and Conservative political climate:

…I think it’d be cheaper

If I just got a job, learned to be a street sweeper

I’ll dance to the beat, shuffle my feet

Wear a shirt and tie and run with the creeps

Cause it’s all about money, ain’t a damn thing funny

Sylvia Robinson was a producer for the track and, as a Record Executive for Sugar Hill Records and the person who signed Grandmaster Flash and the Furious Five, she also played a huge part in its inception. She co-founded Sugar Hill Records in 1979 (when her husband’s label All Platinum was losing money), reportedly after being inspired to record the underground rapping style she heard at Harlem parties. This led to her launching Sugar Hill’s first act, The Sugarhill Gang and ‘Rapper’s Delight‘, the first rap song to become a top 40 hit in the US. The next -but perhaps lesser known- highlight in Robinson’s career was her signing of the first recorded all-female rap/funk group The Sequence (also in 1979). This act included a 19 year old Angie Stone and their first single ‘Funk You Up‘ (the second release for Sugar Hill) went Gold.

‘The Message’ was released when Sugar Hill had been around for three years and arguably eclipses ‘Rappers Delight’ to be Sugar Hill’s most significant release.

As a highly influential figure in the history of hip-hop, Sylvia Robinson is a woman who will never be forgotten.