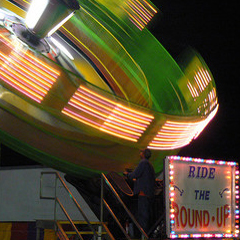 This week’s closing tune is ‘Nostalgia‘ by Emily Barker & The Red Clay Halo which you may have heard last night as the theme from BBC1’s law-and-disorder drama series, Wallander:

The image Ride the Round-up is from Benimoto’s Flickr photostream and is used under the terms of the Creative Commons Attribution 2.0 Generic license.