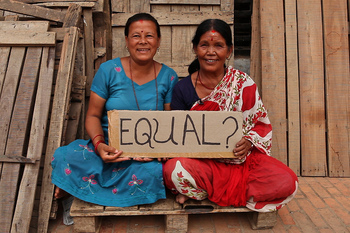 Here we have the stories that we haven’t been able to cover during the week, but which we wanted to share. We don’t agree with, or endorse, everything we link to. They may be included for interest or a different perspective. Some links may be triggering, and outside sites are not always safe spaces, so please be careful if you are feeling vulnerable in any way.

If you have any more links you would like to share, please do so in the comments.

And I will end this round-up with some music to start your week. This is the quite exceptional Valentina Lisitsa playing Liszt’s La Campanella. You can see more of Valentina’s work on her YouTube channel.

[The image is two smiling women from Nepal, one wearing blue and the other red, holding a cardboard sign on which “Equal?” is handwritten. It was taken by World Bank Photo Collection and is used under a Creative Commons Licence]