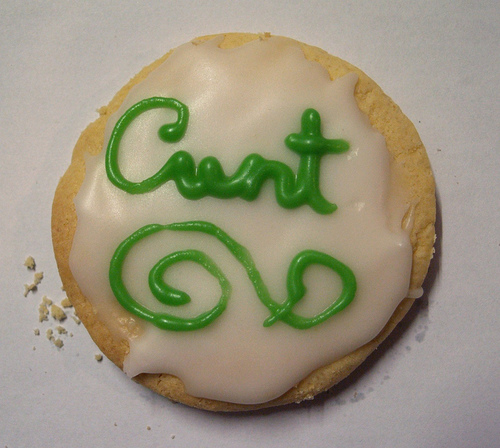 Folks, it’s that time again. No, not the time where the doctor morphs into another doctor. It’s the weekly round-up where we list the links we weren’t able to cover during the week but wanted to share. Standard disclaimers apply: We do not endorse any of these links as they may include different interests or different perspectives. If you’re feeling sensitive or vulnerable, please tread carefully as some of the links may be triggering.

3. Too young, too old, but never the right age (The Globe and Mail)

4. Feminism…What’s Next? (In These Times)

17. Cecile Duflot and the floral dress, just another day in the french parliament (Slate)

19. Hoorah for older women as icons of beauty (Guardian, Life and style)

20. Jodie Marsh “on why she thinks of herself as a feminist” (BBC)

22. Disabled People Can Have Relationships With Able-Bodied People (Brisbane Times)

24. How should we talk to men about sexism? (Laurie Penny, Independent blogs)

The picture above is of a cookie with icing on top. There is green icing spelling the word cunt. The image was taken from sagbrfem and used under the creative commons license.