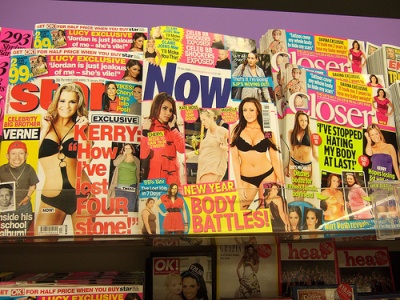 Eating disorders and the media

This is a guest post by Rachel Lauren Cowey. Rachel works full time, but volunteers for three charities and is starting a degree in counselling in September. She tweets here.

With the amount of attention the media pays to celebrities and women’s appearance and weight, is it any wonder more and more girls have low self-esteem?

We are constantly told that the only way to succeed is if we are gorgeous, perfect and skinny – the media never focuses on how many intelligent and successful women there are out there!

Eating disorders are a mental health illness; they have the highest mortality rate of any addiction. Yet people brush them off as attention seeking or extreme diets.

It was a different story during recovery. The unit told me I couldn’t survive at the weight I was yet the media boasted about size 0 celebrities. They were alive and emaciated, why wasn’t I allowed to be too?

This isn’t the media’s biggest flaw. No. Printing emaciated photos of sufferers and revealing their lowest weight is. Why?

1) It reinforces the belief that eating disorders are about weight, using anorexia as a shock factor. Anorexia Nervosa is the least common eating disorder actually!

2) It is incredibly triggering for sufferers. It could push someone into relapse or someone may think they aren’t ill enough and not get help.

3) As someone who is not willing to give out photos and my lowest weight but wants to raise awareness and help others, it is incredibly difficult to find a magazine that will print my story.

Why does everything have to come down to image? Why can’t we just celebrate people’s achievements and inspiring stories?

One day I will get my story out there and one day I hope the media wakes up and realises the damage it causes.

The photo shows a rack of women’s magazines featuring the headlines “Kerry: How I’ve lost FOUR stone!”, “New Year Body Battles” and “I’ve stopped hating my body at last” and photos of women in bikinis and underwear. By jaimelondonboy, shared under a Creative Commons Licence.