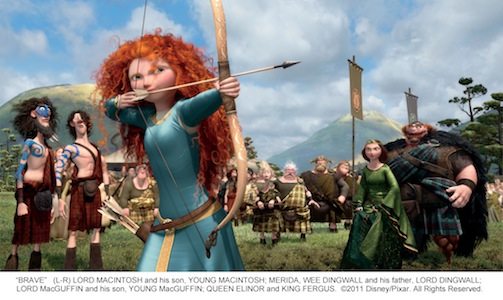 Whether we like it or not, the planet of films made for girls is almost entirely colonised by princesses and sparkly pink princess culture overflows the screen, putting mothers of adolescent daughters under pressure to turn their female offsprings into Snow Whites, Cinderellas, Mulans and Pocahontas.

Kicking off with Snow White in 1937, the lineage of Disney Princesses was created and later officially branded in 1999. Feminist critics have been challenging this franchise on many levels, The F-Word published Amy Tuckwell’s review of 2009 The Princess and the Frog in March.

The princesses are not confined to animation either: last month we had two live action princess films in the UK cinemas: Mirror, Mirror with Julia Roberts and reviewed for us by Ada Nkechi Snow White and the Huntsman.

Now Pixar, legendary computer animation studio that brought us Toy Story and Finding Nemo, joined Planet Princess by releasing Brave, their first film with a female lead. For those who expected a new player to bring some fresh air into the stale princess-ful castle, this in itself is slightly disappointing: why couldn’t Merida be something else? Is ‘princess’ even a job?

Of course the influence of visual culture on its consumers is far from straightforward, yet Geena Davis, founder of Geena Davis Institute of Gender and Media, mentions the research showing the most girls believe they can be princesses because that is basically all they see girls doing onscreen.

Our new reviewer Tricia Lowther, who has watched the film with her five-year-old daughter, is wondering whether princess culture is redeemable at all and if so, what it takes:

“Earlier this year Brave‘s writer and co-director Brenda Chapman responded to a blog post on Indiewire withthe comment: ‘It was absolutely my intention to subvert the princess role. There is no prince in my movie. I wanted to turn the pink princesses on their heads – no pink and no prince.’

It would be preferable to have princess-free films, but if the princess must rule films aimed at little girls, surely best that Brave rules the princess films with a princess who delivers a different message from the rest.”