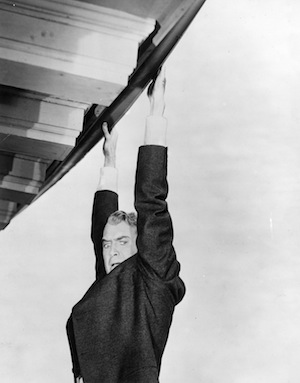 “I doubt there is a single film-goer who has never heard about Alfred Hitchcock,” opens Agata Frymus her review of Vertigo for The F-Word.

Well, if there is, BFI Southbank steps in to rectify it, at least for Londoners and those willing to travel. Between June and October Hitchcock’s body of work will be presented in its entirety (bar one film lost forever, 1927 The Mountain Eagle).

One of the films, Vertigo (1958), will be screened every day between 7 and 27 September to celebrate not only “the genius of Hitchcock” but also the fact that it has just won the prestigious critics’ poll ran every 10 years from 1952 by industry magazine Sight&Sound.

In the September issue of the magazine Hannah McGill, freelance writer and critic, wonders about the usefulness of such polls: “How long does it take for a film to settle enough to be considered canonical?…seniority and nostalgia play such a huge role (and so many flaws are forgiven in films of monumental reputation) that new films can’t compete.”

Retaining “seniority and nostalgia” in ever-changing social landscape comes at a price. Certain emancipatory advances are necessarily omitted; certain old tunes are yet again replayed. Back to Vertigo‘s victory, Agata asks: “Doesn’t labelling a picture that is… well, quite sexist, as ‘best film ever’ tell us something about the society we live in? Shouldn’t there be at least some degree of awareness among critics of how harmful such representations might be?”

Whether you are a Hitchcock fan or far from it, click here to read the review of Vertigo and confront your opinion about it with Agata’s.

If you have never seen this ‘best film of all time’ but would like to or you want to revisit it, we have two pairs of tickets to give away. To claim your prize, please email me at ania.ostrowska[at]thefword.org.uk with your name and the details of preferred screening and putting the answer to the following question in the subject line:

In which contemporary London borough does Hitchcock’s birthplace lie?

The deadline is Tuesday 4 September.