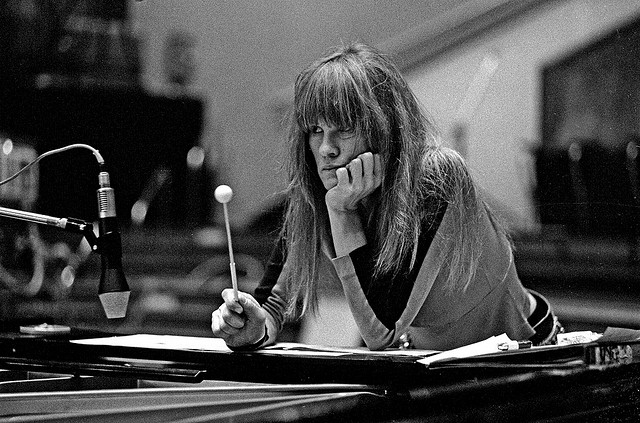 Most of jazz composer and bandleader Carla Bley‘s work is instrumental and showcases her musicianship as a pianist and organist. The vocals, particularly from Carla herself, are few and far between in comparison to this work. 1973’s Tropic Appetites does contain some leftfield vocals from Julie Tippetts. These could possibly be categorised as “difficult” for listeners with a less sophisticated palate (like me!), who generally prefer their thrills to be a bit more immediate. But that seems to be the point: it isn’t about immediacy. 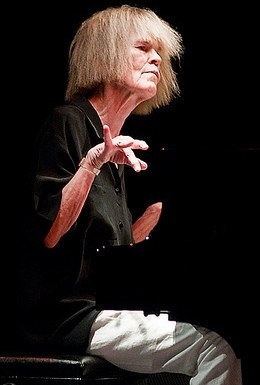 One vocal track that could be said to fall into a more accessible category, while paradoxically also possessing both subtlety and depth, is ‘Dining Alone‘ from 1977’s Dinner Music. The sense of loneliness and undercurrent of anxiety in Bley’s delivery makes it easy to miss that she is actually narrating the situation of a protagonist waiting to meet someone, rather than directly acting it out. (This anxiety is mostly understated but becomes delectably hand-wringing from the line “Tongue tied!”) Indeed, before properly examining the lyrics, I spent a long time mentally processing the lines “his wine” and “perhaps someone else he knows” as references to the host of an uncomfortable dinner party, with the song serving as a first-person account of a guest. There are also parts that could evoke a solitary evening of people-watching in a restaurant. Regardless of such specifics, I’d say the song hauntingly captures the repetitive disappointment of another introspective evening briefly punctured by the vague promise of adventure; “time to go” says Carla (barely sung), complete with a beautifully executed sigh to sign the piece off.

‘Dining Alone’ is the sort of quietly dramatic refrain that really ought to be widely available at karaoke but probably never will be, owing to its obscurity in comparison to the usual choices available to pub showboaters. For this beautiful song to be a frequently interpreted standard would be thoroughly deserved but it probably remains all the more special for being so overlooked by the mainstream. It may not be a liberated portrait of solitude but its stirring exploration of the more melancholic kind is compelling and intelligent enough for this not to matter.

Static black and white YouTube clip shows a moderately distant shot of a young woman at a piano.

The first picture is an NDR-Jazzworkshop shot of Carla Bley in February 1972 by Heinrich Klaffs. The second is of Carla in concert at Jazzaldia in 2009 and is by El Humilde Fotero del Pánico. Both shared under a creative commons licence.

You can find out more about Carla Bley’s music at her website. (Click on either icon on the home page and then report to the Warden’s office to select a visit to Carla Bley.)