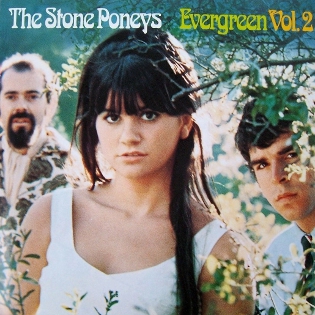 Song of the day: The Stone Poneys – Different Drum

“I always feel, when I’m in a crowd of a bunch of rock and roll guys, that they would like to put me in the position of being a groupie…”

“…It’s really hard for a single girl to get a band of backing musicians, because there’s all that ego problem of being labelled a sideman for a girl singer”

Ronstadt mentioned these hurdles as a woman in music two years after the success of ‘Different Drum‘, her third single with The Stone Poneys. She was being interviewed alongside three other successful singers of the time: Lynn Carey, Lydia Pense and Nansi Nevins. Her greatest commercial success came later, as a solo artist in the mid-1970s, when she became the top-selling female vocalist of the decade and “first female rock superstar”. She worked with the producer Pete Asher and, though some music journalists and critics reportedly attempted to cast her as a mere “puppet” and “pawn”, she went on to develop production skills for her work:

“Now I know how to do it, and it’s much more fun. In fact, it’s very easy for me to sit in the studio for 15 hours at a stretch without a lot of things that are real important to me, like colour and light.“

Along with this, Asher has roundly dismissed any suggestions that Ronstadt just did as she was told, suggesting she was “everything that feminism’s about, at a time when men still told women what to sing and what to wear”.

The success of The Stone Poneys’ version of ‘Different Drum’ as the arguably definitive one partly stems from Ronstadt’s presence as a performer and interpreter. On the contrary to what popular culture would have us believe about monogamy and gender, she states a convincing case for women who seek the freedom to conduct their relationships outside of the moncentric norm:

“Yes, and I ain’t saying you ain’t pretty

All I’m saying is I’m not ready

For any person place or thing

To try and pull the reins in on me“

Though writer Mike Nesmith‘s version is well worth a listen, I’d say it is The Stone Poneys’ rendition that is the most compelling and effective.

I’ll leave you with the following quote from Alexa of the US Mislabeled blog who suggests that the success of the version featuring Ronstadt’s vocal is testament to “a growing willingness to redefine gendered boundaries”:

“…In my opinion, one of the best things about this song (besides that fucking ill harpsichord solo!) is that it was originally written and performed by men, yet only became a hit once being picked up by the Stone Poneys. I think this small fact has a lot of relevance – if you think about Different Drum coming from a man’s perspective the lyrics are representative of traditional gender norms and assumptions…”

There’s obviously still much work to be done in terms of challenging those traditional norms but Linda Ronstadt’s performance of ‘Different Drum’ certainly offers a nice bit of inspiration.

Video description: Static YouTube shot shows cover of The Stone Poneys’ Evergreen Vol.2. (See image info embedded in the image at the beginning of this post for details.)