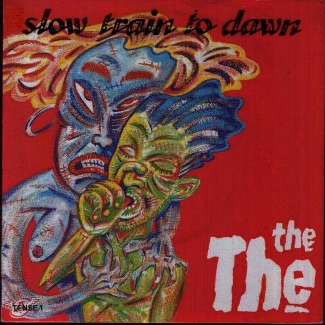 Song of the day: The The (feat. Neneh Cherry) – Slow Train to Dawn

“You try to make it easier upon yourself” (Neneh)

These words will probably have a familiar ring to them for anyone who has ever tried to convince an angry one-cause activist of the importance of intersectionality. Whether the lyrics of The The‘s ‘Slow Train to Dawn’ are meant to stretch to include this reading is a matter of interpretation but they do seem to tell the possible story of a hard-done-by man -angry at the constraints of capitalism?- scapegoating a woman for his troubles. (Could this song be referencing the very slow train to the dawn of equality?) Alternatively, ‘Slow Train’ may simply be about the differing vulnerabilities of two people in a turbulent relationship but there seems to me to be a layer of tension that goes far wider than this. Indeed, I’d suggest the metaphors at play in the video point towards the fragility of male power and unfairness of the position women are placed in when men are expected to embody it (possibly when suffering forms of oppression themselves and therefore seeking refuge in domination).

Matt Johnson did suggest in a Melody Maker interview that he had perhaps relied too heavily on giving a visual interpretation of songs in videos -tying them to specific images- rather than letting them say more through the pictures viewers make up themselves. However, even without the striking image of a scared but steely Neneh Cherry tied to train tracks while a wide-eyed and anxious Matt Johnson stokes a steam train engine, it could be argued that the song strongly hints at themes of masculinity, power, racism, misogyny and objectification:

with desires that I can’t satisfy” (Matt)

“So all the love I gave to you

‘Slow Train’ was a release from the 1986 album Infected. At this point, The The consisted of just Johnson, along with various associates for different songs. He was joined by Cherry for the track after she had split with the experimental electronic jazz rock group Float Up CP (three years after the split of Bristol-based post-punk act Rip Rig and Panic). Johnson reportedly listened to at least 50 or 60 demo tapes of singers before being struck by Neneh: “There was a quality of voice which instantly moved me.”

Video description: Black and white film. Matt Johnson is smoking alone in an engine room. The wheels of a steam train run along tracks. At 0.40, it is revealed that Neneh Cherry is tied to the tracks. The singers communicate their respective lyrics from these positions, both visibly sweating. This is intercut with more shots of the train speeding towards its destination. Matt is stoking the fire of the train. Neneh is moving and looking up, aware of the approaching train. At 1.45, we see Neneh and Matt crouched in a pit underneath the tracks as a train runs over and above them. They appear to be at opposite ends and moving towards each other. From 2.35, we see Matt back in the engine room and Neneh back on the tracks as the train approaches the tunnel in front of her. At 3.50, a tiny toy train runs past Neneh’s left leg. She stretches back to look as it passes and then shuts her eyes, appearing to let out a breath of relief.

Addendum: There is a brief shot of a toy train being placed on tracks alongside a full size wheel at 1.09, followed by another short clip of it running at 1.13.