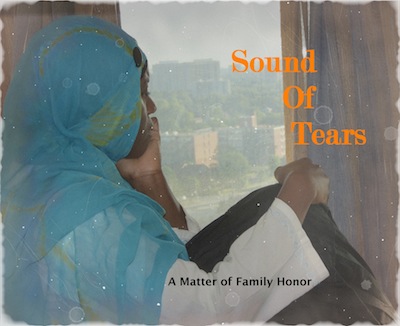 Sound of Tears: a film to raise awareness about ‘honour’ killings

This is a guest post by Cameroonian-born Canadian actress and filmmaker Dorothy A. Atabong, currently fundraising for her film about honour killings.

I picked up a pencil and wrote what was the first of many drafts of Sound of Tears – A Matter of Family Honor after I came across a newspaper article about a Mississauga girl who was strangled by her own father and brother.

Sound of Tears is a dramatic short film about a young woman who must abide by the strict customs and traditions embedded in her since birth. She must heed the admonition and relinquish a forbidden love: it is a matter of family honor.

The purpose of the film is to raise awareness of the issue and send out a large message to millions of people.

It will be submitted to film festivals all over the world and also made available to libraries and other cultural/educational institutions. Pamphlets and other useful information will be distributed at festival screenings so people can engage in a dialogue. We hope they will be passed on to women in a conflict situation with their families.

While in the UK forced marriage is a criminal offence and there are hotlines to assist victims of such crimes and places to offer them shelter, the Candian government is only on the verge of creating a platform for these issues.

We are happy to say we have Dr Amin Muhammad of Memorial University of Newfoundland as our supporter. He is an expert on the subject and the author of the report on honour killings for the federal government.

Principal photography for the film will begin this fall in Toronto where the film is set. The film is directed by Dorothy A. Atabong (theatre and TV director), with Ben Lichty as director of photography.

We are currently in the fundraising stage. You can sponsor us on indiegogo.com, a crowdfunding site where one can raise funds for independent films and other ventures. In return backers get perks such as DVDs, posters and credit in the film.