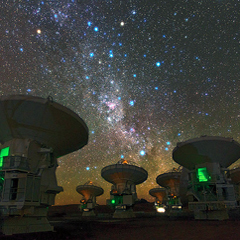 This week’s closing video is “Follow The Heron” by Karine Polwart, recorded live at the Shrewsbury Folk Festival in 2009:

The image at the head of this post is The Southern Milky Way Above ALMA, from the European Southern Observatory’s Flickr photostream and used under the terms of the Creative Commons Attribution 2.0 Generic license.

The image is a photo of a starry night sky, with the Milky Way prominent, above a cluster of large telescopes pointing skywards.