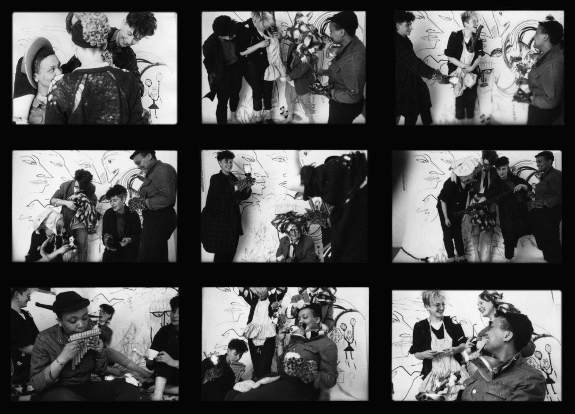 A guest post from Deborah Withers about an upcoming exhibition mapping the music making histories of the UK Women’s Liberation Movement.

Music & Liberation: The History of Feminist Music Making in the UK, 1970 – 1989 is a Heritage Lottery funded exhibition touring the UK this Autumn. The exhibition shows how feminists used music as an activist tool to entertain and empower women during the 1970s and 1980s. It features the work of Jam Today, the Northern Women’s Liberation Rock Band, Feminist Improvising Group, Ova, the Fabulous Dirt Sisters, Abandon Your Tutu, the Mistakes and many other artists yet to be discovered by contemporary audiences.

The exhibition is based on the Women’s Liberation Music Archive (WLMA). Launched in May 2011 by Frankie Green and myself, our aim is to map the music making histories of the UK Women’s Liberation Movement (WLM), 1970-1989. Both Frankie and I were concerned about the invisibility of a large amount of women’s musical history, and we wanted to recover it to share with new audiences. The website has already had over 33, 000 unique hits and documents well over 100 acts, many of which had no information about them on the internet until we began to organise the material. The also archive has a physical presence and we are currently discussing the best place to deposit the material.

Music & Liberation creates a complementary physical space to the online WLMA, where people can interact with and learn about the histories of feminist music making from the 1970s and 1980s. It contains photographs, objects, books, ephemera, posters, installations, oral histories, films and of course music. It’s the type of exhibition you could easily spend a day at, so if you do visit, make sure you leave lots of time to listen, read and watch as much as you possibly can!

What kind of music can you expect to encounter at the exhibition? The music of the WLM was incredibly diverse. Soul, reggae, jazz, rock, folk, pop, A cappella, sound art and improvisation were all part of feminist music scenes. Women sometimes combined these genres, or invented new ones. In recent times, the sonic cultural memories of feminist music history have been heavily shaped by punk and riot grrrl, so you may be surprised to learn about the musical diversity of the recent feminist past in the exhibition. Yet there is a sense of continuity too in terms of the strategies women used in the WLM, as many rejected the capitalist ‘malestream’ and set out to be independent, making culture on their own terms.

Music & Liberation has provided crucial resources to organise the music of the WLM. While a lot of the musicians have managed to digitise their back catalogue, many have not. I’ve been handed countless audiotapes of recordings of practices, live performances and demos that have been lurking at the back of cupboards, or underneath beds, unheard for decades. Some of these are the only recordings of the bands in existence, and you will be able to listen to them at the exhibition.

Women are still massively marginalised in music making, from grassroots to professional levels. Part of the reason for this is a lack of role models within music histories and culture at large. My hope is that with the WLMA and Music & Liberation, more people will be able to recover these legacies so they claim a permanent place within culture.

The exhibition begins at the Butetown History & Arts Centre in Cardiff, on Sunday 9 September. An afternoon tea party taking place from 2-4pm opens the show, featuring a viewing of filmed oral histories created especially for the exhibition. There will also be free events taking place over the course of the exhibition, kicking off with a ‘Living Archive’ performance in Cardiff with improviser Maggie Nicols and percussionist Shelly Morris on the Sunday 16 September.

In Manchester there will be a day of discussions about women in music including an author talk with Karren Ablaze, whose new book The City is Ablaze!, is being published later in the year. In Glasgow there will be open mics, exhibition tours and singing workshops. In London the opening night will feature performances and talks from folk singer Frankie Armstrong and Sadista Sisters founder Jude Alderson. Please check the website and follow us on twitter or facebook for updates as events are being added all the time. Hope to see you at the exhibition!

All venues except the Glasgow Women’s Library* are wheelchair accessible and an RNIB Penfriend is available to facilitate access for visually impaired visitors.

Photo of Abandon Your Tutu in a studio © Andy Minnion. Used with permission