Charlotte Rowland reviews a production of Mary Stuart, which she finds an excellent portrayal of two different yet equally trapped women 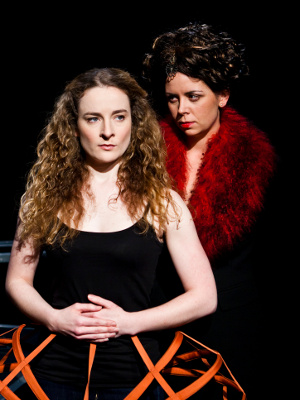 Elizabeth Tudor and Mary Stuart are two of the most prominent women of the 16th century (in England and Scotland, at least), and the longevity of the interest in their story is evident from the play Mary Stuary. The première of the play was 212 years ago, 213 years after Mary was executed. This revival has been met with much interest, as it shows, with modern twists, the story of two women in a world hostile to the idea of women with power.

Charlotte Rowland saw The Faction Theatre Company’s production earlier this month, and was particularly impressed with how familiar and relevant the story of two women, based on events four centuries ago in a play written two centuries ago, was in this modern production. Charlotte writes:

It is, after all, a tale about the lengths to which a government and individuals will go to protect themselves and a country from religious extremism and terrorism. The corruption of justice, false-imprisonment, tyranny – these are not issues unfamiliar to the modern world.

More than that, Charlotte sees parallels in the positions of Elizabeth and Mary to those of many modern women. In the play, one is supposedly powerful and one is impotent, yet Charlotte questions whether either of them have any real agency.

Both are trapped in a masculine world that leads them to unhappy ends. Critics of the play have debated since its first performance which of the women’s destinies is most tragic. While it is Mary who is executed, she leaves the story in white, flanked by two friends, and (cleverly in this production) ascending a ladder, as if to heaven. It is Elizabeth who is left at the close of the play sitting completely alone. Still, there is sense that Mary has been beaten down and lost her fighting spirit, such that her saintly, sacrificial end cannot be quite satisfactory – as she puts it, “I am a shadow of Mary.”