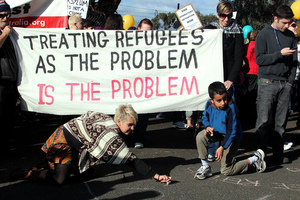 Refugee women: a culture of disbelief

Discrimination and violence against women are global issues and well documented, but there is a persistent pattern of women’s accounts of their mistreatment not being believed when they arrive in the UK to seek protection.

Under International Law individuals fleeing persecution are protected by the Refugee Convention, but their protection is limited to persecution based on race, religion, nationality, political opinion and membership of a particular social group, and there is no reference to gender. This omission can probably be attributed to the fact that when the convention was written, in 1951, there was a lack of understanding and that the Convention was drafted entirely by men.

A woman who experiences sexual violence as a result of her political activity could potentially be granted refugee status, providing she risks persecution if she returns to her country of origin, a prerequisite of the Refugee Convention. However, the lack of reference to gender in the Convention has caused problems for women who have been subject to violence or discrimination specifically because of their gender. In recent years, case law has shown that women who have been trafficked or who experience, or fear, genital mutilation can form a particular social group, and can be granted refugee status. However, when they are persecuted by a family or community, as opposed to the state, it must be further demonstrated that the state would not be able or would be unwilling to protect them. 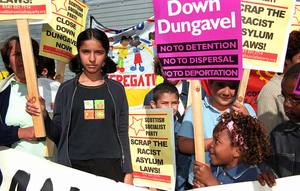 Even when refugee women do fall within the scope of the Refugee Convention and are entitled to protection many are not believed by the UK Border Agency (UKBA), largely because the credibility of their asylum claim is not accepted; this year, research conducted by Women for Refugee Women disclosed that 96 per cent of the women they interviewed had been refused asylum; 76 per cent of them stated that it was because they had not been believed.

Cecile’s case is typical. “I came to the UK from the Congo in 2008. I came to this country for safety. I was involved in a woman’s group which was trying to mobilize widows to vote in the elections. I was imprisoned, raped and tortured. I have been refused asylum here” (Refused, by Women for Refugee Women).

Research conducted by Asylum Aid, a UK-based NGO, found that caseworkers repeatedly “rejected one key element of a case and then proceeded to reject all additional elements on the basis of that key element having been rejected”. For example Grace’s asylum claim was not believed by UKBA because they considered it improbable that she had been fed as often as twice a day when in detention.

Jackie was arrested, detained and gang raped by soldiers for her involvement in an opposition political party. The UKBA refused her claim on the basis that she had worked as a nurse with victims of rape in the Congo and therefore had knowledge of such cases, making the UKBA believe that the experiences she described had not happened to her.

The trauma experienced by women claiming asylum can prevent them from disclosing the full details of their story, particularly when they have experienced forced prostitution, rape and sexual violence, and when the asylum interviews take place in rooms where other asylum seekers are waiting to tell their story. A female interviewer can be requested but this policy does not apply to interpreters. Failure to disclose all the relevant information at the initial stage can lead caseworkers to conclude that any facts disclosed later are not plausible.

Caseworkers have been reported to make poor decisions for other reasons, including an inadequate understanding of gender-based persecution, the use of reports from the refugee’s country of origin, which are taken predominantly from a male perspective, and an inadequate knowledge of current case law.

Poor decision making not only causes refugees emotional suffering and distress, it can also lead to their detention and destitution, leaving them homeless, with no benefits and without the right to work. In 2011, at least 35 per cent of women’s asylum cases were overturned at appeal, highlighting the failure of UKBA to assess women’s claims fairly and effectively at the initial stage.

It is hard to understand why there should be such a persistent reluctance to believe the accounts given by women of their mistreatment when they arrive in the UK to seek protection.

[The first image is a photograph from a demonstration in Melbourne, Australia. It features a large banner, reading “Treating refugees AS the problem IS the problem”, and a woman and a young boy kneeling on the floor in front of it drawing on the floor with chalk. The second image is from a demonstration in Scotland to close down the Dungavel detention centre. The photograph is of a group of mainly children who are holding banners reading phrases like, “Scrap the racist asylum laws” and “No to detention, no to disspersal, no to deportation”. The upper image was taken by Takver and the lower one by Gareth Harper; both are used under Creative Commons Licences]