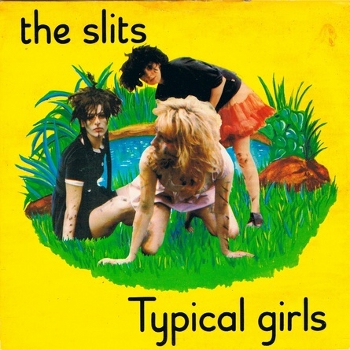 Song of the day: The Slits – I Heard it Through the Grapevine

Following on from the more recent spiky, punky, dubby sound of MIA’s ‘Paper Planes’, we have this classic from proto riot girrrls The Slits. Their take on ‘I Heard it Through the Grapevine‘ (Motown’s lament about “the rumor mill that swirls around a cheating lover“) has been described as “the gold standard in violently recontextualized punk covers” and “transcendent“.

The song is memorable by virtue of it doing what all the best covers surely should: radically reinterpreting a song (a classic in its own right in this case, though I’d suggest it doesn’t have to be) and making it into something new. Apart from the genre shift, Ari’s vocal twists and ingenious insertion of “I heard it through the bassline” at one point in the song give it a life of its own. Meanwhile, the lack of change in terms of heterosexist and standard gender appropriate alterations is refreshing.

I was turned onto this particular Slits number by the Trash Companion #1 compilation. Along with the collection’s eclectic use of Nancy Sinatra, Huggy Bear and Felix Da Housecat, it was one of the tracks that motivated me to venture out to Trash at The End. From those eerily buzzy harmonies to Ari’s “I bet, I bet, I bet…” build-up to the full pogoing joy of the song kicking off, it’s also great to play in a set. (I played it in three within the space of a year when I had two weddings and the F-Word party to contribute to.)

The story goes that this was a song marked out by Island Records as the “perfect debut single” for the group. They were apparently not in agreement and, not unreasonably, wanted to have their own song ‘Typical Girls‘ on the A-side. ‘I Heard it Through the Grapevine’ may be my own personal favourite of theirs but I’m still glad they got their way on that one, as it seems to signify the creative control they had and I suspect they wouldn’t have been the band they were or gained the place in history they hold without that. Okay, so the single only peaked at number 60 in the charts here but that just means the brilliant B-side gets to remain an at least partially hidden gem rather than an overplayed mainstream hit. (Being sampled by Pizzicato Five and referenced by The Gossip doesn’t kill the kudos but is arguably not quite enough to end the track’s relative obscurity in comparison to some of its contemporaries that reached the top 10.)

I’d say it’s one of the best cover versions of all time.

YouTube description: Static picture of We do ’em OUR Way compliation with a coloured haired punk Mona Lisa on the cover. (Featuring The Sex Pistols, The Stranglers, Hollywood Brats, The Slits, The Flying Lizards and Devo, amongst others.)