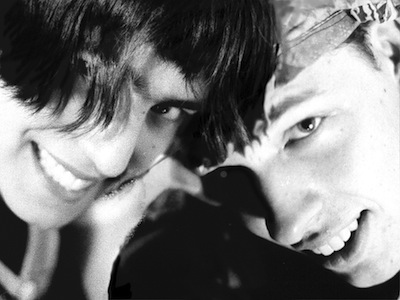 In this guest post Selina Robertson, one half of queer feminist film club Club Des Femmes, introduces the screening taking place this Friday as part of Scala Beyond season. Selina’s favourite Scala Beyond idea was genius The Parkey Posey Film Festival. Right now she can mostly be found tearing through Clare Balding’s new book My Animals and Other Family.

When our friends at Scala Beyond asked us if we wanted to take part in their second fringe film season, we were very happy to accept.

We decided to adhere to the spirit of the original Scala repertory cinema (closed down in 1993) rather than its letter. After some deliberation we decided against another screening of Vampiros Lesbos which has been played to death and possibly wouldn’t be that interesting for people to come and see again (which is not to say we don’t love that film!) We thought more about the strength and collaborative effort of Scala Beyond to activate so many film festivals, pop-ups, indie film exhibitors, cinemas, film clubs and societies to take part in this magical two-month alternative cine-programming extravaganza, in the same way that the original Scala cinema brought together so many different audiences with their incredibly diverse alternative film programming.

Collaboration is central to much feminist art practice and as our contribution we decided to investigate these working partnerships. How do friends, lovers, family translate intimacy and private dialogue into public art? We called the film programme TWO LIVES after Gertrude and Alice, perhaps one of the most renowned lesbian couples of the last century whose entire lives were about collaborative creative living. So how does collaboration work, how does inspiration work between two people? Who is the muse for whom when life and work get mixed up? From Gertrude and Alice to the modern day we’re rifling through 100 years of film to see how artists answer these questions.

We have selected work by Bev Zalcock and Sara Chambers, Sarah Pucill and Sandra Lahire, Del LaGrace Volcano and Brixton Brady, Maria Mohr, Inger Schwarz and Kerstin Schleppergrell and we are also delighted to have a rare screening of 8mm home movies by Tove (Moomin) Jansson and Tuulikki Peitilä. We are delighted to say that the London contingent, Bev Zalcock, Sara Chambers and Sarah Pucill, are coming along to our screening.

Recently Club Des Femmes has marvelled at the courage of a Russian feminist punk collective Pussy Riot who have been able to galvanise so many organizations, groups and individuals around the globe to speak out about the importance of free speech and artistic independence (and we love listening to the words ‘pussy riot’ being repeatedly spoken on BBC news!) or the ongoing actions of French feminists La Barbe who wear fake beards to protest against sexism in French public life.

In our own way, we also champion feminist collectivity and collaboration in our choice of films, presenting artists who have turned the personal into the political, and we celebrate the transformative power of radical art. Audre Lorde said that we can create the collaborations we dream of, borrowing the line from Carson McCuller’s The Heart is a Lonely Hunter in her essay ‘Eye to Eye: Black Women, Hatred and Anger’: “I am not meant to be alone and without you who understand.”

Click here to buy tickets for TWO LIVES at The Horse Hospital in London.