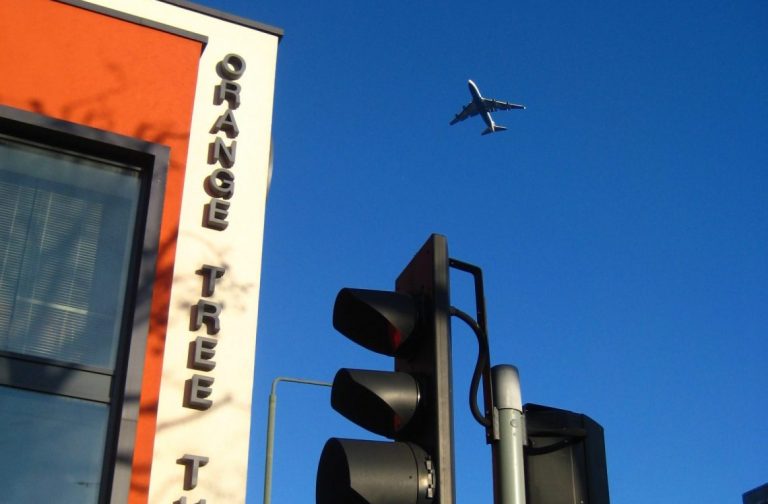 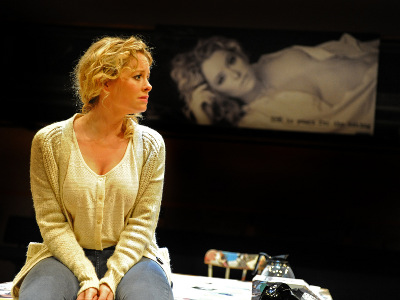 The premise of this production is an intriguing one. It’s the UK premiere of a play written by Spanish playwright Ana Diosdado nearly 40 years ago, under the rule of Franco. In writing the play, Diosdado was working against the grain, both in the act of writing and in the themes that she dealt with. Back then, women were not supposed to write plays. They were supposed to be dutiful homebodies: wives and mothers, who preserved the traditional family structure. Diosdada rejected this and in Yours for the Asking she explores the role of the media, consumerism and celebrity culture in Spanish society. It is the story of Juan, a journalist working for a popular women’s magazine, who goes to interview Susi, a young model, and the relationship that they strike up.

The production gets off to a powerful start. The theme of objectification confronts us before the play even begins: the set is hung with perfume adverts, which feature the model Susi, played by Mia Austen, naked and draped in satin, pouting and looking into the camera seductively. The play opens with the voiceover from the commercial; then Juan, played by Steven Elder, enters, returning from his week-long assignment interviewing Susi, looking weary and despondent. Despair is the overriding tone here, as he argues with his boss on the phone, then with his wife Celia, played by Rebecca Pownall. The tension between Juan and Celia is nicely established by the actors here. The lines are delivered with punch and verve and Pownall does a brilliant turn as a wife exasperated by her husband’s self-pity. The chronology of the play jumps around and we are then transported back to the moment that Juan and Susi first meet: he is trapped in the lift in her building and they talk as they wait for the repairman. We see Juan’s cynicism and his dissatisfaction with his job and we learn something of Susi’s twitchy neurosis. This conversation also reveals the scandal that Susi became associated with, in which three children were poisoned by the perfume she advertised. The story of the unfolding relationship is told compellingly throughout the first act. The acting is strong (though at times Austen overdoes it a bit with the nervy breathiness) and the sparse set is used cleverly. Manny, the cocky photographer who accompanies Juan on the assignment (played by James Joyce) provides some light relief and punctuates the emotional intensity with his joking.

An overriding theme of the play is the power of advertising and popular media to subsume. Susi’s identity becomes one and the same as the product she advertises. Bored housewives are brainwashed by the trash that Juan and his colleagues churn out. The women who send Susi hatemail in the aftermath of the poisoning scandal are, in Juan’s words, “good people who do awful things”, lead on by the propaganda of the press. Juan’s personal morality becomes swamped by his job and the need to produce articles about things that he doesn’t believe in. Out of all of this, Susi and Juan establish a connection, both of them trapped in their different ways.

Susi’s tale is a familiar one: a young, attractive woman is admired, commodified and then vilified 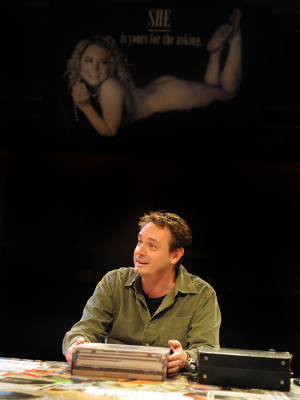 Scattered throughout the play are some interesting period details, which mark it out as unmistakably written during a time of political repression. There are nods to the historical context here and there, such as when Juan talks of his time in jail for political activity. And when the characters discuss suicide there are notes of another Spanish playwright, Lorca, a great chronicler of the sexual and social repression of Spain in the twenties and thirties. In Lorca’s work, characters often associate death with freedom and in taking their own lives they find a means of escape. And so it is in Yours for the Asking, though I felt there was a touch of melodrama in this production’s handling of this theme.

Alas, the melodrama builds throughout the second act. The emotional pitch becomes slightly histrionic and Juan emerges, though conversations with Celia and Susi, as whiney, misanthropic and self-pitying. The production’s non-linear structure becomes dizzying – when the play reaches one climax, it jumps back or forward to reveal a different one. I overheard one audience member comment as she left the theatre, “I’ve never seen so many endings in a play before!”

The Orange Tree press release for the production tells us that the play, while written back in 1973, “still has pertinent things to say about the consumer society in which we live today,” and there is much in here that will resonate. The play demonstrates the capacity that humans, goaded on by popular media, have for cruelty. Susi’s tale is a familiar one: a young, attractive woman is admired, commodified and then vilified. But despite these contemporary themes, I couldn’t help feeling that the central relationship was something of a cliché- a jaded, middle-aged man whose wife doesn’t understand him finds a soulmate in a beautiful young woman. And for all the feminist promise of Diosdada’s background, I was slightly disappointed. While we are told Susi’s plight, Juan is still the subject here and it is ultimately his story. Susi and Celia, both very interesting characters, are, in the end, relegated to supporting roles in his drama.

Yours for the Asking is showing at the Orange Tree Theatre until 6 October. Limited £5 tickets for under 26s available on Thursday evening performances. Audio described performances: Tues 25 Sept, 7.45pm and Sat 29 Sept, 3pm. There are post-show discussions on Thursday matinees.

Feature image by Peripatetic, and shared under a Creative Commons licence CC BY-SA 3.0, via Wikimedia Commons. Photos in the text taken by Robert Day and used with permission.

Eli Davies is a teacher and writer. She blogs at www.elibloglondon.blogspot, tweets at @EliDavies and is writing her first novel