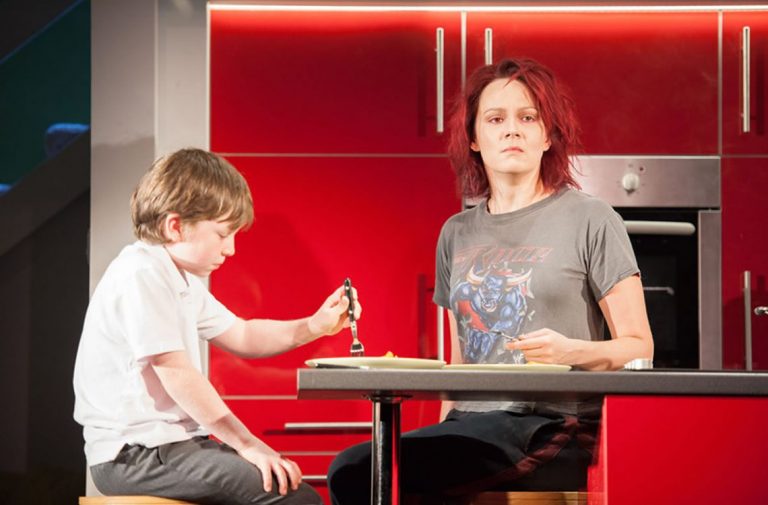 Medea, but not as Euripides knew it

There is something quite extraordinary about the fact that Medea – a Greek play first produced in 431 BC and based upon an even more ancient myth – is so enduring that it still receives renewed attention well over 2000 years later. One reason might be that the tale on which it is based encapsulates some of the most extreme of human emotions. Medea is a woman betrayed by the husband she has left her home for when he leaves her to marry another woman for political gain. Filled with rage and possessive passion, she plots and ponders her revenge, eventually killing her own children to punish him. But perhaps what makes Medea so enduring is the rarity of its passionate female protagonist. There are not many traditional plays in which actors have the opportunity to recreate a female character of such complexity and energy, nor one who, on top of her Hamlet-like struggles with her emotions and existence, also battles so starkly the oppressions particular to being a woman.

This new version, adapted by Mike Bartlett and produced by the Headlong and Citizens Theatre companies, meets this weighty legacy with varying degrees of success. In the title role in this production is Rachael Stirling, best known for her breakthrough TV performance in Tipping the Velvet, and who recently appeared in ITV1’s The Bletchley Circle. She plays a modern Medea with striking red hair and casual tracksuit bottoms. The high-drama of her story is transplanted from the semi-mystical Greek world into the plainness of British suburbia. The set is a typical middle-class house, its walls moving effectively to reveal new rooms as the drama develops. The framing of the extreme emotions and events of Medea in these rather plain parameters by no means blunts them. As soon as Rachael Stirling’s Medea comes hammering down the stairs, she bursts into the play so full of wit and energy and intelligence, the audience’s attention is fixed on her all the way to its final, harrowing conclusion.

By replacing the sometimes supernatural qualities of Medea found in the original script with an emphasis on the human, the production was all the more engaging 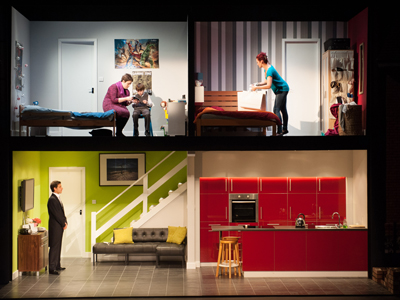 Indeed there were elements in this production that worked really well and complimented Stirling’s powerful performance. From the outset it is a script in which laughs are surprisingly abundant. The audience are introduced to the scene of Medea’s marital (and escalating mental) breakdown through the comedy of her two female friends (Pam and Sarah – the latter played brilliantly by Lu Corfield). It is a tool used to display Medea’s own intelligence, her relentlessly rapid dialogue and wit rivalling their gentler bickering, when she finally appears on stage. But it is also effective in drawing sharp contrasts with the inner torments underneath Medea’s quick remarks. When suddenly left on stage alone or with her son (she has only one child in this production), the pain that is constantly hanging over her emerges all the more sharply. One such memorable instance is when she stands in the kitchen making her son’s dinner, monotonously chopping vegetables while he sits, staring and uninterested. Loud music is drowning out all else, a reflection of her own introspective thoughts. Considering the pan before her, she slowly dips her hand into the boiling water and picks out the vegetables, lowering them shakily onto her son’s plate, and then sits down to eat as usual. It is the first hint at the level of her descent into madness and a powerful display of the intensity of her pain and desperation.

It also proved that the familiar settings in which Mike Bartlett has placed Medea’s character, trapped in the repetitive routine of family life, worked, not to trivialise the play, but to make it more identifiable. Similarly, by replacing the sometimes supernatural qualities of Medea found in the original script with an emphasis on the human, the production was all the more engaging. This is perhaps best captured at the very end of the play. In the Greek-based drama Medea flies off triumphantly in the chariot sent by her grandfather the Sun God. This modern Medea, standing covered in blood in her burning house, her dead son beside her, instead calls out that “if there’s a God, here’s his chance to show himself,” and her requests are met only by the sound of sirens.

Medea’s son, Tom – the subject of her final dramatic act of revenge – is also used to great effect in this production. The spectre of his constant silence (for he doesn’t speak at all throughout) from the very beginning gives an ominous sense of the longevity of this families troubles, of which we witness only two days. Medea’s interactions with him, the level of disinterest or maternal love with which she treats him, act as a powerful marker of her mental situation. Even before the dramatic climax it is brief scenes between this mother and son that produce some of the production’s most memorable moments. It facilitates some very emotive acting from Stirling, as she struggles with the conflict between her love, anger and indecision, and evokes strong emotions in the audience.

Her husband has – it becomes apparent – essentially traded her in for a younger, “tighter” model in her early twenties (or at least this is the motivation that Medea feels most keenly). That she is wounded by this injustice is communicated in her dialogue with Jason. “You used to like my legs,” she reminds him, to which Jason replies matter-of-factly, “You had nice legs.” 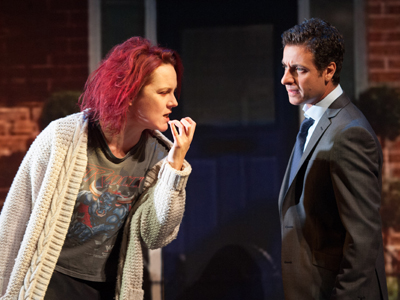 Yet there are certainly a few problems with this production. The script can be laboured; Pam’s long monologue recounting the violent death of Jason’s young bride, caused by Medea’s poisoned dress, at times felt stilted despite the unfolding drama. In other moments details in the script seem disjointed. These come to light particularly in the dialogue between Medea and Jason, where Jason hints at an unloving element of her character or problems in their past relationship, accusations that are fleetingly made and then undeveloped. The audience were left asking whether Medea was being irrational or not. The problem lies in the ambiguity of Jason’s character in this production. When he first comes on to the stage his character is slightly too rational and sympathetic. Though his reputation quickly breaks down as he begins to rant about how at times “he hates women”, and that the world would be a better place without “their tears and hips”, his characterisation never seems quite clear enough. One wouldn’t welcome a pantomime villain and in the original play he is shown to be a more subtle and nuanced character, skilled in debate, but in this production such moments seemed to lead more to confusion than complexity.

It also felt at times that Mike Bartlett’s version had trouble translating into a modern setting one of themes that has so carried the play’s modern popularity – that of Medea as a woman oppressed because of her gender. The emphasis of other characters on her intelligence is (rightly) retained, but so too is the notion that she is from a ‘better class’ of people. Frequent mention is made of it, and her well-spoken accent in contrast to the other characters slightly more colloquial dialect, reminds us of the fact. Regardless of the disadvantages of sex, these are two thing that in the modern world both evoke privilege. So when she laments of a world that favours power over intelligence, I found myself asking where power has been denied her as an individual. There was scope in this production to answer this question in terms of the power women can lose in having a family and raising children, not least because of the emphasis on Medea’s sacrifices for Jason, the husband who has now simply abandoned her, in the original play. The sacrifices that many women still make in their careers, leaving them in a more vulnerable and dependent position than male partners in the event of a separation, could have formed a powerful context here. But on the contrary, she later makes reference to how she loved when they would both come home from work to their son, seemingly just before her mental breakdown. If anything she seems to have been an empowered woman with more opportunity than most. It becomes one of those moments when aspects of Medea’s original character seem to jar slightly with the modern translation Bartlett has tried to create in this production.

Rachael Stirling more than meets the challenge of this famous part. She produces a complex Medea: eccentric and witty, but full of pain and confusion

However this was not uniformly the case. One aspect that worked well in translating Medea’s frustration at her oppression into a modern setting was the interaction between her sexuality and relationship with Jason. Her husband has – it becomes apparent – essentially traded her in for a younger, “tighter” model in her early twenties (or at least this is the motivation that Medea feels most keenly). That she is wounded by this injustice is communicated in her dialogue with Jason. “You used to like my legs,” she reminds him, to which Jason replies matter-of-factly, “You had nice legs.” This is not an unfamiliar scenario and it is in this context, where she is powerless over the physical body on which society places so much of her worth, that the declaration, “I hate being a woman,” in her famous soliloquy makes sense.

The script also plays cleverly with some commonplace misogyny. Jason appropriates it to belittle Medea in their confrontation, declaring that the world would be a better place without women’s high pitched whining, and colouring his hatred of her with gendered insults when he later declares, “I married a bitch”. In myth, Medea was a witch, and this is the accusation you at first expect Jason to throw at her. The interchangeability of the words in the play makes an interesting point. But, in fact, Medea has already taken the sting out of these gendered insults with her clever comedy. Plotting her revenge, she states that she’s “witching – it’s like bitching but weirder.” This is not a Medea whose actions and character you can dismiss with misogynistic stereotyping.

Rachael Stirling more than meets the challenge of this famous part. She produces a complex Medea: eccentric and witty, but full of pain and confusion. The production as a whole is not faultless but it made the audience audibly laugh, whimper and gasp. It also left me wishing that there were more female parts for wonderful actors like Rachael Stirling to display their talent.

Medea played at Watford Palace Theatre until 27 October; it now goes on tour around the UK until December. Photos are used with permission.

Charlotte Rowland recently graduated from the University of York with a degree in History and has now returned home to grapple with an ever-expanding lists of aspirations. Her life currently revolves around writing, temping and preparing for a three month trip to Palestine in 2013. As always, it also contains a healthy dose of walking, cooking, theatre and other indulgences. You can follow her @CharlyRowland