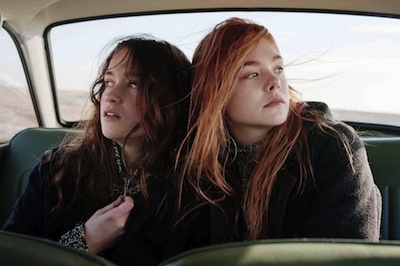 One of the films in the official competition is Ginger and Rosa by Sally Potter, a British director famous among others for her brilliant adaptation of Virginia Woolf’s Orlando in 1992.

Our regular contributor Sophie Mayer has written extensively on Sally Potter (including a 2009 book The Cinema of Sally Potter: A Politics of Love) and interviewed the director for The F-Word in 2007 about the latter’s take on Carmen.

Sophie admires the way Ginger and Rosa juxtaposes the personal and the political, telling the coming-of-age story of two teenage friends against the backdrop of volatile international politics and a parallel, but always intertwined, adult universe:

Once upon a time, there were two girls, one fair and one dark. Born on the same day, they were close as close can be: ironing each other’s hair, wearing each other’s clothes, sharing cigarettes and dreams of the future – a future over which the threat of the Cuban missile crisis hangs. There’s also growing up, which is both a dream and a threat, as the girls determine not to live their mothers’ lives but get caught in the confines of what it was in 1962 (and still is?) to be a heterosexual woman: the expectation of finding your happily ever after in the regard of a man, even if it means breaking up with your best friend.

Does the world of a teenage girl end with a bang or a whimper? How does a betrayal of those closest to you compare to a full-scale international diplomatic crisis?