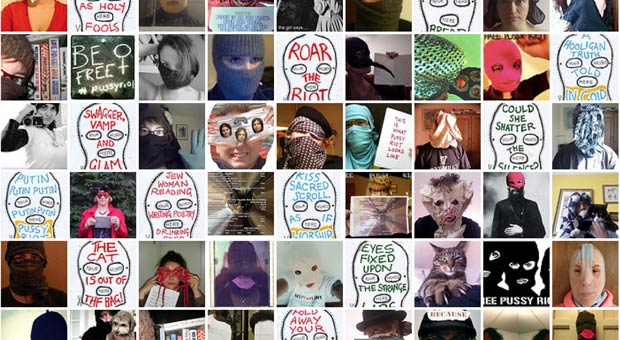 This collection of poems and artwork joins a global chorus of support for Pussy Riot. Fran Allfrey is invigorated

Catechism: Poems for Pussy Riot brings together poems, art and a range of voices in a gesture of support for the incarcerated members of the Russian punk feminist group. The collection is an inspirational, angry, positive, passionate and fitting tribute to Maria Alyokhina, Yekaterina Samutsevich and Nadezhda Tolokonnikova. But the works also raise questions, expose problems and reveal a community which spirals far beyond the walls of any penitentiary, making for enjoyable, if often troubling, reading.

Catechism is an apt name. Whether full of rage (exemplified in SJ Fowler’s relentless epic poem ‘They’) or hope (as in Sarah Thomasin’s refrain “Our comrades… Will put on their bright balaclavas/ And they will sing. And they will sing”). Whether classical or fragmentary in style, and whatever the gender of the voice, the works come together into a single chant, a doctrine, which can be adopted by all who stand up against the church, the state – the man.

The poets add their noise, scribbles, songs and screams to those which illicitly echoed in the rafters of the Cathedral of Christ the Saviour on 21 February, in the performance which led to the Pussy Riot convictions. The editors, Mark Burnhope, Sarah Crewe and Sophie Mayer, have done well to bring together

so many poets in a matter of weeks (ensuring the poems were ready for Pussy Riot’s trial, earlier this week) and yet still create a feeling of cohesion. A line from Theodoros Chiotis sums up my sensations, as I was swept up in the poems: “We are going viral, we have only three number, one, two and many”.

Obvious themes run through the poems – sex, religion, gender, bodies. The editors arranged the work alphabetically by author name: as soon as a few poems drift into a pattern, the next shifts gear, style and subject. New voices are mixed with established names (and there are many: look out for John Kinsella, Jay Griffiths, Deborah Levy, Aoife Mannix and Ali Smith). It is interesting to see how the passion and the Passion of the Pussy Riot martyrs is treated differently by such a spectrum of writers: Deborah Levy makes a joyful, exasperated, yet unquestionably confident declaration: “Pussy Riot – let’s just tell it how it is. You are female artists who sang a song that frightened angry men with their backs to the wall.” But just before this offering, the newer voice of Melissa Lee-Houghton shows a different type of assertiveness, scorning a vapid existence found a world away from protest and riots.

Language is twisted, chopped up, stretched and tested

Other poets choose a more academic approach. What Pussy Riot’s imprisonment means for Russia, freedom of speech and the place of women globally are explored through the use of data, such as when Ray Hsu presents cold facts revealing women’s under-representation in the Canadian literary scene, as well as transcripts and elaborate metaphors. The ideas of the bitch and the pussy or cunt and the whore/virgin trope pervade through many verses – and those of us who might be just starting to identify as feminists can test how comfortable we are with the c-word, with the stereotypes, what they mean, how we use them and how they make us feel.

Poets reference everything from nursery rhymes to ’90s girl bands. Goya, Marta Kubišová, Rasputin and Voltaire find themselves page to page, and these myriad references add to the sense that within Catechism, poets bring together ideas, influences and solidarity from across the world and across time. Perhaps, however, it would have been nice to have an editors’ introduction, with some key dates, to make the back story more accessible for anyone who hasn’t been following the Pussy Riot trial – simply to avoid a slight sense that the poems preach to the converted.

For those of us who relish in the aesthetics of words, Catechism is also a treat. Language is twisted, chopped up, stretched and tested by parentheses, ellipses and obliques, bold, caps and italic type. With so many poems, it can be difficult to know where to start.

But this is an ideal collection to flick through in search of a flash of inspiration, when you’re not sure what you’re looking for – choose a poem that looks pretty, choose a short one, choose only those with conventional layout, or only those accompanied by illustration. There is playfulness alongside the serious and contemplative. A favourite of mine, Alison Croggon’s ‘Dance of the Seven Veils’, is awash with fluids that “o’erspill” and pyres that burn in a chapel, and her words swing across the page, a thurible spewing hazy sex scenes, raising questions around the freedoms and pleasures and restrictions of the female body. The clash of old and new in the archaic language, erotic imagery and zig-zagging text is a sensory treat.

Pulled together in just over a month, this is an ambitious and important effort to send a message of solidarity to the imprisoned and persecuted 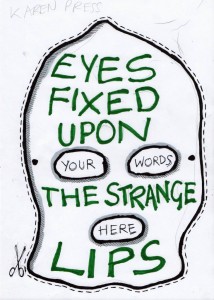 Photo poems and illustrations provide provocative pauses. The first consists of visual instructions for a Happening – or a performance art event – surreal, obscene and inane gestures and phrases combine to make a statement that lingered for a long time in my mind. About 20 cut-out-and-keep balaclava outlines drawn by Mark Burnhope, filled with new slogans drawn from neighbouring poems, mirror Pussy Riot’s uniform. You get the sense, once more, of camaraderie, and are reminded of newsprint images of masked protests in support of Pussy Riot across the US and Europe. Chella Quint’s graffiti, and Amy Evan’s and others’ inked illustrations and zine-esque collages, add energy to the pages and a homemade, underground feel.

Above all, it’s the onslaught of emotion which distinguishes this collection. Pulled together in just over a month, this is an ambitious and important effort to send a message of solidarity to the imprisoned and persecuted, of disgust and incredulity to the corrupt and controlling. Alongside the awareness raising, and indeed fund raising (any revenue generated through the ‘pay what you think it’s worth’ system will go to the Pussy Riot legal fund, and the English PEN Writers at Risk Programme) the poems fulfil another powerful purpose. This book is the embodiment a sisterhood, a feminist, humanist community reaching out to each other to stand side by side, and speak as one, not only for Pussy Riot or against Putin, but for and to one another. To steal Jay Griffith’s closing lines, these voices will “ring out all over the world, like cathedral bells”, and it is important that they ring far and wide, in prisons, churches, parliaments, classrooms and streets.

You can download Poems for Pussy Riot here. Edited by Mark Burnhope, Sarah Crewe and Sophie Mayer (whom you may recognise as having written for The F Word! – including about this collection).

Fran Allfrey is currently studying for an MA in medieval English, in London. When not pouring over Anglo Saxon poetry, she consumes feminist lit and peppermint tea by the bucketload, and spends far too long thinking about The Michael Gove Problem.