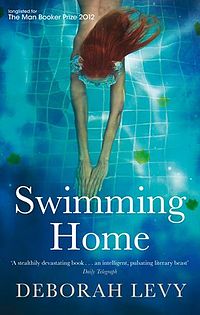 People often talk of the resonance of certain books. Many weeks after finishing a story, it continues to throb through daily life, refusing to be silent. When faced with this problem – and it can prove a bit of an issue – I usually find myself turning to something else almost immediately, trying to purge memories of a particularly heartbreaking, all-consuming finale. It’s the mark of a truly excellent read. Deborah Levy’s Swimming Home has, for me, been unrelenting in its refusal to become yesterday’s news or to leave my thoughts: it’s now been two months since I finished it and everything else has seemed inferior in comparison.

The novel has all the classic elements of a happy story about middle-class holiday-makers: two families rent a villa in the south of France, safe from the noise and bustle of cities and jobs. Into this idyll plunges Kitty Finch, a depressive enigma who is invited to stay until she can find accommodation elsewhere. She wants famous poet-in-residence Joe to read her poem: he’s reluctant. Not everybody warms to Kitty, but everybody has an opinion about her, everybody has their own views on how she ought to be dealt with.

Such detail is, however, ephemera. Setting, situation, surroundings: all rebel against tradition, functioning to demonstrate the meaninglessness of plot. Swimming Home is not highly convoluted, and despite the unconventional style it remains a unified, comprehensible whole. Things move backward before moving forward: nothing is linear. And yet there is a picture, in many different media and painted with many different colours. The sun may be shining, but the pool lurks at centre-stage, a mesmerising pit “like an open grave filled with water”. Swimming Home is like a whirlpool. Even though the reader finds themselves sucked beneath its all-consuming tide, then buffeted and tossed between tempestuous waves, eventually they’re spat out rather mercilessly again, to regard what has happened from a distance.

No navel-gazing here: life is held up for inspection, albeit fleetingly and in gasps rather than deep inhalations

The dust is – literally and metaphorically – swept away from the spare room Kitty inhabits and from the lives of those around her. She is the catalyst we sense has been desperately needed: unashamedly nude at moments of high emotional crisis, she lavishes attention and affection; she’s interested and interesting, beautiful but afflicted by her own, ugly experience of of depression. She’s

a window waiting to be climbed through… as receptive as it was possible to be, an explorer, an adventurer, a night-mare. Every moment with her was a kind of emergency, her words always too direct, too raw, too truthful.

When Kitty looks at others, “the adrenalin of it was like a stain”. No navel-gazing here: life is held up for inspection, albeit fleetingly and in gasps rather than deep inhalations. Kitty’s power lies in her inability to deceive herself or others. She seems to burn with a “hostile intent” for the truth. In this respect, no one is spared. In a space of communal living, where everyone lives separately in an isolation of their own making, she is the much-needed breath of fresh, if manic, air.

It’s a tale about the “transient place” held in the home, in the regard of others, in love affairs, in desire

Split into sections according to the days of the week, the work has a sinister, apprehensive feel. As with the novels and short stories of Virginia Woolf and Katherine Mansfield, we know something terrible could happen at any moment, but the narrator’s account would be detached, not allowing for any preparation on the part of the reader. In this steady march towards inexorable disaster, our emotional investment is dashed on the rocks. It’s tight, stealthy and macabre. The sense of approaching catastrophe is heightened by an almost prophetic cast of characters, satellites who revolve around one another in a dance of death until the final, brutal denouement. Even as the end approaches, readerly voyeurism comes into play – the cynical doctor who lives next door bags her “prime seat” to watch the decline, and we are no different.

Levy has created a literary feast: a gorgeous smorgasbord of motive and meaning, jumbled together with surprising grace and coherence. Vision clears as the story folds in on itself, like wiping ice from a wind-screen. It’s a tale about the “transient place” held in the home, in the regard of others, in love affairs, in desire. The final pages reveal a new, altered protagonist, who remembers the haunting echoes of a long-gone summer – like the Ramsays in Woolf’s To The Lighthouse, who return each year to the Isle of Skye, full of ghosts and memory. “I have never got a grip on when the past begins or where it ends,” we hear this new voice say, “but if cities map the past with statues made from bronze forever frozen in one dignified position, as much as I try to make the past keep still and mind its manners, it moves and murmurs with me through every day”.

Swimming Home achieves the same restlessness, refusing to behave, to conform, to be fixed, or indeed to leave the mind long after the final page.