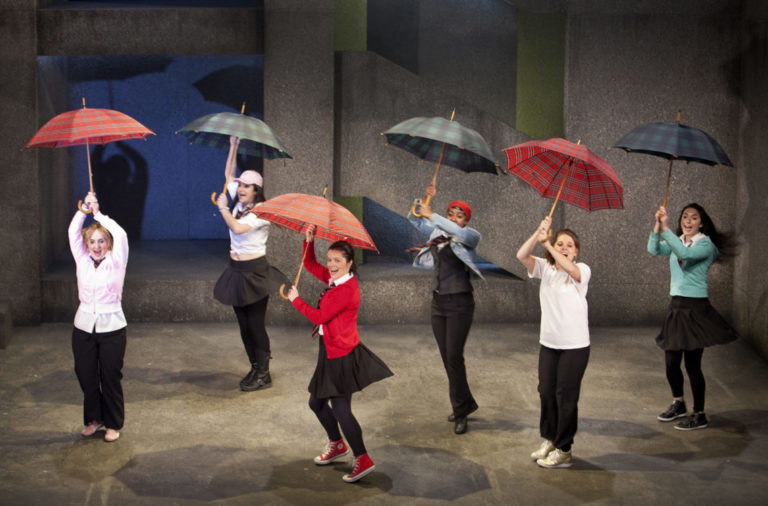 Picture shows : Glasgow Girls Dress Rehearsal. (l-r) Dawn Sievewright, Roanna Davidson, Frances Thorburn, Amaka Okafor, Stephanie McGregor,Ameira Darwish. Picture © Drew Farrell. Tel 07721-735041. National Theatre of Scotland, Theatre Royal Stratford East, Citizens Theatre, Pachamama Productions, Richard Jordan Productions Ltd in association with Merrigong Theatre Company (Australia) present WORLD PREMIERE of Glasgow Girls opens 31 October 2012 at the Citizens Theatre, Glasgow Inspired by a true story Conceived for the stage and directed by Cora Bissett. Book by David Greig Music and Lyrics by Cora Bissett, Sumati Bhardwaj (MC Soom T), Patricia Panther and John Kielty. Set Design by Merle Hensel, Musical Direction by Hilary Brooks, Choreography by Natasha Gilmore, Lighting Design by Lizzie Powell and Sound Design by Fergus O’Hare The full cast is: Callum Cuthbertson, Ameira Darwish, Roanna Davidson, Stephanie McGregor, Myra McFadyen, Amaka Okafor, Patricia Panther, Dawn Sievewright and Frances Thorburn. Based on the true story of one of the most vocal and powerful asylum campaigns to catch the imagination of the media and inspire a community to unite behind its residents, Glasgow Girls is a brand new life-affirming Scottish musical with seven strong female leads and a vibrant multi-cultural voice at its heart. The musical promises to be a celebration of Glasgow and the power of teenagers with a cause.  The Glasgow Girls are a group of seven young women who have highlighted the poor treatment of failed asylum seekers. The group of girls from Drumchapel High School protested against the detention of one of their friends, Agnesa Murselaj, who had fled from war-torn Kosovo. Publicity grew as the girls challenged the First Minister and publicly voiced their concerns as more children at their school were dawn raided, detained and deported. Two BBC television documentaries have been made of their story. Press contacts: Clare McCormack, Press Officer Tel:

All singing, all dancing campaigning 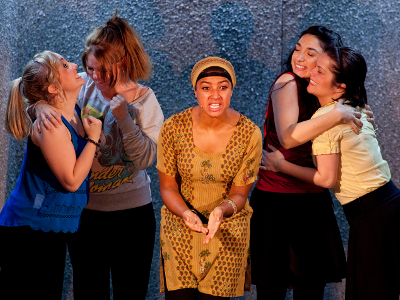 Glasgow Girls is the story of a campaign to stop dawn raids on asylum seekers and the detention of children: not the usual territory for a musical. In fact, the real women whose story the play is based on were dubious about the prospect, as are the on-stage characters who mutter sarcastically and apologetically that “our musical is mostly about photocopying”. Despite the less than typical topic, this musical brilliantly deals with the subject matter: it both articulates a strong political statement about the treatment of asylum seekers and sensitively portrays the strength of friendship between a group of school girls.

It is the policy of the UK Government that asylum seekers are dispersed all over Britain. Glasgow is the only city in Scotland with enough surplus hard-to-rent housing to accommodate asylum seekers. This has resulted in a concentration of newly arrived asylum seekers in, amongst other places, the infamous Red Road estate in the north or the city. This collection of tower-blocks, many of which were demolished this year, was termed “the estate where asylum seekers abandon hope” by The Independent after a spate of suicides – including an entire family – by asylum seekers waiting for decisions on their refugee status.

In 2005, when the true life events of this story took place, asylum seeker children made up an eighth of all the pupils in the local Drumchapel high school. This production is based on is the vivacious campaign by seven school girls from the high school, both native Glaswegians and asylum seekers, after one of their friends, a Kosovan Roma girl and her family, were detained following a dawn raid and came close to deportation. The girls’ campaign added to the political and legal pressure on the UK government who eventually had to relent that a blanket policy of designating safe ‘white list’ countries did not take in to account nuances like ethnic minority status. Subsequently, the girls won Best Public Campaign at the Scottish Politician of the Year award that year. Although a massive achievement, this play is right to pit this against the continuing detention and deportation of asylum seekers. Heartbreakingly, the girls, in their award show finery, sing sadly about the deportation of a mother and her young child who left the community bereft at losing one of their adopted own.

Writer and director Cora Bissett is able to convincingly show a human side to the headlines that this campaign won, whether that be the refugee mother of one of the girls who is afraid that the campaign might threaten her hard-won legal status or the asylum seeker who proudly dresses for work every day despite not being legally able to work 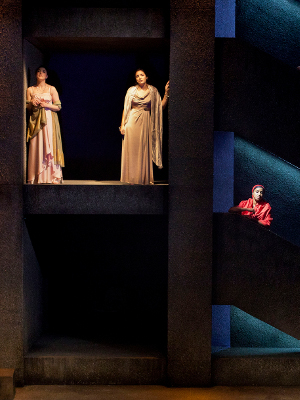 It could seem that a musical about life for asylum seekers in a deprived Glasgow estate is simply unrealistic and paints over the problems that socially excluded societies face. However I would say the musical addresses the difficulties of this community very well. For instance, the cementing of friendships between local girls and asylum seekers is not instantaneous and in fact there is a whole musical number dedicated to overcoming their different backgrounds. In another example, the girls on the campaign trail inevitably come across the usual drumbeating opposition claiming that asylum seekers have come to the UK to take jobs and benefits, both from within their own families and from the wider community. Although local girl, Jennifer, manages to change the opinion of her father, those critical voices in the background are never quite silenced. Writer and director Cora Bissett doesn’t shy away from the complex social and political issues the play highlights. She is able to convincingly show a human side to the headlines that this campaign won: whether that be the refugee mother of one of the girls who is afraid that the campaign might threaten her hard-won legal status or the asylum seeker who proudly dresses for work every day despite not being legally able to work. These are fantastically sad touches which gives us a very real portrayal of this particular complex community.

With the direction of Bissett and based on the book by celebrated Scottish playwright David Grieg, this is a musical that takes a few risks. The play-within-a-play-format is used to great effect to address the ridiculousness of a musical about such a serious subject and adds to the production’s hilarity and believability. The musical format of this production really does work. The huge variety of songs, including a self-aware musical-style opening montage, powerful rapping from a Glaswegian MC and an electro number for the almost robotic UK immigration officers perfectly constructs humour, pathos and pace to the story. The musical score is also used to give us a picture of multi-cultural inclusion as we are treated to traditional Roma and Kurdish songs.

The young cast, who I was surprised to learn mainly came from a dance as opposed to theatre background, all give flawless and energetic performances. Glasgow based musician Patricia Panther portrays a number of characters persuasively as well as contributing some brilliant musical performances to the score sheet. With the young cast comes Myra McFadyen who is fantastically funny as the cynical high-rise neighbour who doesn’t want to be in a musical, eventually gives us a song about how the asylum seeker children belong to everyone now. This is the most crushing song of the night and gives us a sense of how strong community ties can be. Merle Hensel’s set design, the almost overpoweringly grey concrete of a high-rise tower-block, is truthfully depressing but wonderfully versatile as it becomes every scene the girls inhabit: their school, radio studio, mini bus, even the Scottish Parliament. The production design does not shy away from a terrifying depiction of dawn raids: the lighting and sound combine brilliantly to give us an overwhelming sense of how brutal law enforcers can be.

Too often asylum seekers voices are drowned out by political rhetoric 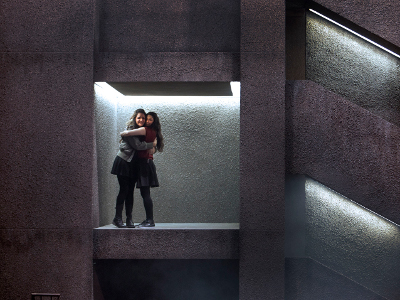 It is difficult to give sufficient feminist comment on the gendered aspects of this play. Although Glasgow Girls is about the campaign and friendship of a group of girls, the issue of gender is skirted around. There is no exploration of why it is the female school pupils who lead the debate where Glasgow was home to young asylum seekers of all genders. There are a number of male characters: first minister Jack McConnell, the secretary for the home office at Westminster, the father of one of the girls and the gangs’ favourite school teacher. However, they are very much in a marginal or supporting role on the fringes of the action. Indeed, all the male characters are ably played by the same actor, Callum Cuthbertson, who the girls need to persuade to play the first minister as “he’s the only boy.”

Glasgow Girls may fudge potential gender commentary but in its place is a piece of theatre that strongly reflects on issues of community and solidarity. What is celebrated here is the cohesion within a working class community that cuts across ethnic and nationality lines and real friendship between young women in one of the most deprived areas in the country who achieved national recognition for their campaigning and determination. This musical convincingly translates a serious issue into a bona fide musical with genuine and warm humour. The only concern is that this is a play imbued with strongly Scottish references, such as the depiction of art work on the M8, the hilarious impression of Scottish Socialist stalwart Tommy Sheridan, Mr Girvin’s likening of political activism to being a Kimarnock fan and the fond portrait of Glasgow (“the weather is really bad/ but at least it’s not Baghdad”), which might not translate well when the production moves to East London in February.

The production team of Glasgow Girls liaised closely with the real women featured in the story, as well as the Scottish Refugee Trust and other locally based campaigns for asylum seeker rights. As a result we are treated to a convincing, sensitive, hard-hitting yet humorous portrayal of the life of asylum seekers in Glasgow. Too often asylum seekers voices are drowned out by political rhetoric. The National Theatre for Scotland allows us to see the individual stories within the big issues and the fact these take place through the format of a musical is certainly an achievement.

Glasgow Girls is at the Citizen’s Theatre in Glasgow until 17 November and will be moving to the Theatre Royal Stratford East from 8 February to 2 March 2013.

Pictures are by Drew Farrell and are used with permission.

Hazel Robertson is an Edinburgh-based feminist who does most of her activism in Glasgow: she has an intimate knowledge of the M8 bus timetable. She likes politics, reading, playing handball and putting the world to rights