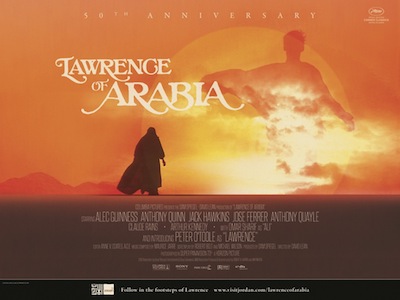 Among other things, December 2012 is the 50th anniversary of the theatrical release of David’s Lean Lawrence of Arabia, a Hollywood epic that unfolds over almost four hours and is an ambivalent account of British officer T.E. Lawrence’s exploits in the Middle East during World War I. The film features breathtaking shots of the desert, filmed in Morocco and Jordan, and is widely regarded as David Lean’s greatest

In celebration of the film’s birthday, it gets re-released in selected cinemas, including BFI Southbank.

Agata Frymus, who took issue with Alfred Hitchcock’s Vertigo‘s cult status before, wonders how our reception of a film is influenced by its reputation:

The classic status of certain films causes further issues. For example, we expect a masterpiece to display brilliance in equal measure in all its aspects. While this principle works rather well in regard to visual arts (with one artist being responsible for the eventual shape of her piece), it cannot be applied as easily to film. Of a cinematic masterpiece we expect technical novelty, new take on otherwise familiar themes and passionate performances, all of which are different people’s responsibilities.

Is it possible to watch Lawrence of Arabia today and ignore 50 years of screenings of the film as well as everything that has been said and written about it? Are we allowed to not like the film granted the status of a “classic” by numerous film critics?

For your chance to win a goody bag compiled by BFI, including a pair of tickets to one Lawrence of Arabia screening at BFI Southbank, as well as a copy of the film poster and the book Lawrence of Arabia by Kevin Jackson, please answer the following question:

How many Oscars did Lawrence of Arabia win during the 35th Academy Awards in 1963?

Email your answer to ania.ostrowska[at]thefword.org.uk until Tuesday 4 December, including the date of your preferred screening.