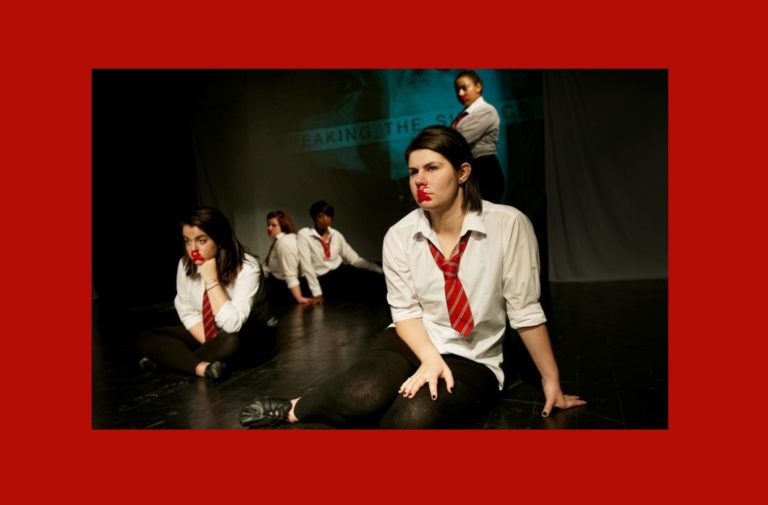 Working closely with Birmingham & Solihull Women’s Aid, Birmingham City University’s School of Acting devised and performed She, a drama that focuses on the incredibly real dangers for teenage girls involved or associated with gangs.

The play shows a snapshot of the lives of three main characters, all affected by the same gang members. One character is in a relationship with a gang member and is subject to domestic violence. Another enters into a new relationship, only to be then used for sex and gang raped. The last is the sister of a gang leader, who is raped by a rival gang member. The harsh realities faced by these girls are numerous. The stories are unfolded cleverly, the audience gradually becoming aware of the links and seeing how gangs affect these individual characters. A scene I found incredibly moving was the aftermath of the characters’ ordeals. Each character made movements with their hands as though they were washing themselves as images projected on screen behind them showed their distraught, mascara-stained faces. The other young girls joined in, moving their hands over their arms as though they were washing away dirt, shame and guilt.

There is a real emphasis on girls being silenced; the opening scene shows around 20 young girls in school uniforms, all standing or sitting silently with red tape on their mouths. Eventually, one girl speaks up, then another follows, all detailing their experiences of relationships and offering various points of view. “It wasn’t her fault,” one girl repeats, arguing with another who insists, “She knew what she was getting into.”

Though it was all fun, games and giggles at first, the lyrics to ‘Barbie Girl’ were shown to be more ominous. “You can brush my hair, undress me everywhere,” sang the girls, wearing haunted expressions on their faces

Some of the pop songs used, such as Aqua’s ‘Barbie Girl’ and Beyonce’s ‘Listen’, which many young people will be familiar with, had double meanings. Though it was all fun, games and giggles at first, the lyrics to ‘Barbie Girl’ were shown to be more ominous. “You can brush my hair, undress me everywhere,” sang the girls, wearing haunted expressions on their faces, some distressed as unwanted hands moved across their bodies, symbolising the immense impact the media had on their bodies and how they are perceived by those around them.

She enables the audience to understand and empathise with the victims. I felt angry about the way in which the young women were used, as mere toys to play with. The young men treat them as nothing more than sexual objects that exist purely for their gratification, something which I believe all women face living in a patriarchal society. There are also opportunities for audience interaction, with a Who Wants to be a Millionaire themed quiz based on statistics around young girls’ experiences of rape and sexual violence.

Year 10 students from local schools were invited to watch the drama, with opportunities after to participate in workshops and discussions around the issues raised. Adults are asked to leave the theatre at the end to ensure that young people are able to have a safe space to talk. Support staff from Birmingham & Solihull Women’s Aid are available during and after the drama, providing initial emotional support and information.

I came away from the drama feeling angry and emotional; the drama had definitely tugged on some heartstrings. I felt, and still feel, outraged at what teenage girls are experiencing in our society and how little support or awareness is available. Teenage girls need to be empowered to make choices without fear of dangerous consequences and value themselves for who they are instead of how they look or what or who they have been involved with. Teenage boys need to be informed and educated on what constitutes as healthy behaviour in relationships and friendships. They need to understand that sex isn’t sex if there isn’t consent. And, most of all, society needs to take responsibility for this.

Annika Spalding works as a children & family worker for a women’s organisation. She also is a mummy to two amazing girls and likes to think of herself as a writer. Plus, she loves cake