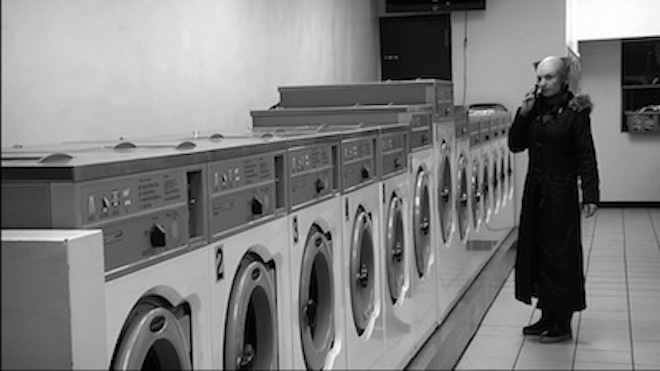 All you get for the end of the world is… codependent lesbian space aliens!

I would like to celebrate what may well turn out to be the very last day on planet Earth with a review of a recent film that offers a science fiction way out: a move to planet Zots, where the film’s three alien protagonists come from.

Our regular film contributor Selina Robertson reviews for us first feature by New York based director Madeleine Olnek, Codependent Lesbian Space Alien Seeks Same, the film about earthly adventures of three lesbian aliens sent down to our planet to get their hearts broken.

One of them, Zoinx, ends up dating Earthling Jane who remains “oblivious to the fact that she is dating an alien. Zoinx’s baldness, eagle-staring eyes, flat monotone voice and freaky dancing only seem to increase Jane’s fondness of her gal”…

The review is followed by Selina’s interview with Olnek in which she explains, among others, why she did not shy away from using the word “lesbian” in the title of her comedy:

“The bottom line is, many people are often frightened to see ‘gay’ work or find the idea off-putting, so straight audiences need to be reassured they will see something they will understand and be able to relate to. But I will say that any good work that resonates, no matter what the sexuality of the protagonists, is going to be a universal and relatable experience. And bad is just bad, gay work does not have the corner on bad. I’ve seen a million horrible films and plays about straight people, their sexuality did nothing to soften the experience, believe me. In terms of the title of my movie, I see it more as claiming the film’s comedy credentials: anyone so homophobic as to not think it was funny shouldn’t come see it anyway”.

If you are a fan of the 1950s sci-fi B movies aesthetics and intergalactic humour, you will surely enjoy Selina’s review and interview.

And if the world as we know it doesn’t end today, you can get hold of the film via Peccadillo Pictures website.

Have great winter holidays and see you in the New Year!