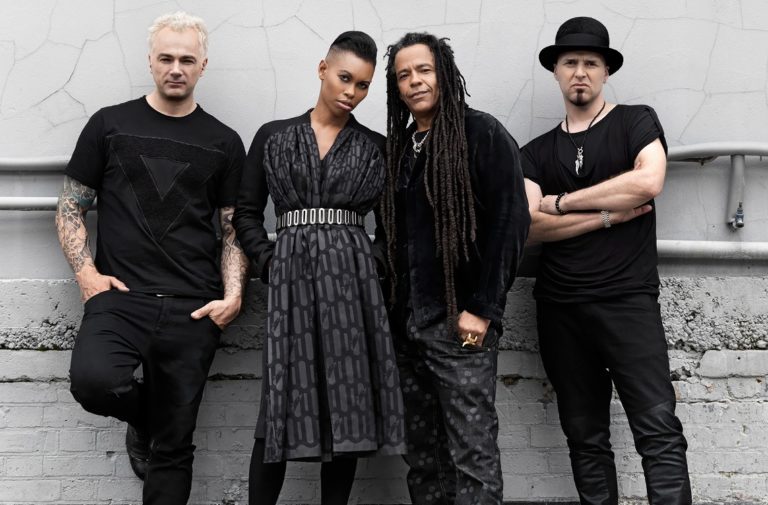 Named in the 17th edition of The Guinness Book of British Hit Singles and Albums as one of the top 500 best-selling acts since the charts began, Brit rockers Skunk Anansie were a memorable part of 1990s rock and continue to have a firm place in the nostalgia for it, despite not pandering to commercial demands of the time (“Obviously we had a lot of fun, but I always remember not getting on TV shows because we weren’t Britpop enough” Skin has said in a recent interview).

A jokey comment from Skin that Skunk Anansie’s music was “more clit-rock than Brit-rock” led to the term catching on and arguably adding to the politically charged perception of the group. (The angry ‘Charity‘ is definitely the song that sticks most in my mind and seems to resonate now more than ever.) Despite this, Skin refuted the label, saying “We’re not a political band, really: we’re a band with politics in it. The way that we see our lives is political because you can’t escape politics. You can’t just ignore certain situations.”

The group have been back together for three years now and have played several gigs over the past three years (the first of which was reportedly sold out in 20 minutes). Here’s a snippet of what Jess McCabe has to say about their gig in Brixton this month:

“Skin explodes onto the stage of the Brixton Academy for the last night of Skunk Anansie’s tour. She’s wearing short-shorts, cut out tights, a glittery top and a short coat of what appears to be leather feathers. She bounces. She struts. The 45-year-old Skunk Anansie frontwoman still knows how to put on a show. But it’s her glorious voice, aided by the band’s intense performance, that fills the Academy and is the reason she immediately has the 4,000-ish strong crowd in the palm of her hand.

Tonight is freezing in London. It’s 1 December and Skunk Anansie are coming home to play one of London’s top venues, in the part of town where Skin grew up. It’s nearly two decades since the British rock band released their first single and even the line-up has remained unchanged since 1995: Skin (Deborah Anne Dyer) on vocals and guitar, Cass (Richard Lewis) on bass, Ace (Martin Kent) on guitar and Mark Richardson on drums.

I’m with a group of six people, all about the same age. As we chat before the gig, our expectations for the night are mixed. “It’s nostalgia,” Sam says; we were all teenagers when Skunk Anansie’s most well-known hit ‘Weak’ was in the charts.

But most of us agree that Skunk Anansie’s records have not been on regular rotation in our respective collections for years. I admit I was only vaguely aware the band had re-formed (Skunk Anansie went on hiatus in 2001, coming back together in 2009)…”

Image description: Mark, Skin, Cass and Ace (in that order) of Skunk Anansie, all wearing black and dark grey, standing against a white wall.