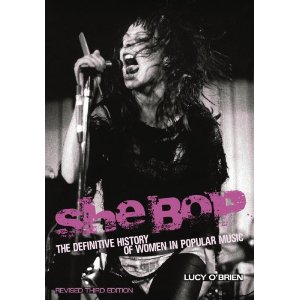 A cut above the rest

She Bop is the third edition of a book written by musician and journalist Lucy O’Brien detailing the history of female artists across a broad range of musical genres, from the parlour singers of the forties, to the inevitable chapters discussing riot grrrl and The Spice Girls and everything in-between, including rap and world music. Each chapter explores a different genre, meaning that the writer goes into a lot of detail, not favouring one genre over another like some similar books tend to do.

As well as the music the book features twin discussions of the relevance of feminism and the oppression of women. For example, in her first chapter ‘Riffin’ the Scotch’ which focuses on early blues and jazz music, O’Brien writes how in those very early days of recorded music (the 1900s through to the 1920s) female singers were seen as prostitutes. In order not to be labelled in this way, many of the female singers would choose only to sing in the privacy of their own parlours. It was only when there started to be a divide of ‘race’ music- white music for white people and black music for black people that it helped many of these female artists break through into the mainstream as the most popular ‘black’ music initially tended to be from women such as Ma Rainey and Clara Smith.

There are also chapters about the women behind the music and work in music related industries such as sound engineers, radio presenters and music journalists

In a later chapter that explores female singer songwriters, Tori Amos’ covers album Strange Little Girls is mentioned, talking about the interesting notion of taking songs written by men and turning them around to a female perspective instead, which is particularly intriguing when one of the covers is a version of Eminem’s misogynistic song ’97 Bonnie and Clyde’ which is about him murdering his wife and dumping her in a car. Tori’s version was from the perspective of the ghost of the woman in the car. There is also mention of Tori Amos’s charity RAINN who are a helpline in the US for victims of rape, which she set up having experienced rape at gun point herself in the past.

The book explores more than just artists in various genres and historical periods though; there are also chapters about the women behind the music and work in music related industries such as sound engineers, radio presenters and music journalists. As well as the impact of the digital age that we now seem to be living in. This last theme is especially poignant at the moment because we seem to be losing a lot of our physical entertainment stores; it was only recently announced that the last of the big chain music stores in this country, HMV, is going into administration which probably has a lot to do with the continuing rise of the digital download and websites such as Amazon which mean we can order music and consume it faster than getting a take-away.

In She Bop‘s digital chapter, O’Brien gives mention to shows such as X Factor and websites like MySpace which at the height of its popularity did help to give female singers such as Lily Allen the exposure they needed to be turned into superstars almost overnight. The chapter examines the positive side of the digital age as well as the negative, also mentioning how many bands now can take more control of their music if they so chose, many choosing to self release their own music – bands like Obsessive Compulsive and even the former Roadrunners record contract holder Amanda Palmer are proof of how this approach can be very successful and lead to loyal followings of fans around the world.

If I’m very honest, I did find myself skim reading some of the chapters, especially when I first started reading She Bop. I felt that I would have liked to have known more about how some of the music Lucy O’Brien was writing about affected her personally and how she felt about it, rather than just a history of the music itself. Although she does write a bit about being in a band in the past herself in the introduction and later writes about the difficulty of being a female music journalist in an industry that sadly still seems to be dominated by men. This is just my own point of view though, and I did think the book got more interesting as I read on and I was very impressed by the breadth of the female music industry she covered.

I don’t think I have ever read such a concise picture of the whole scene, I learnt lots of new information I wasn’t aware of before reading this book. I also thought adding chapters about more than just music – the women behind the music chapter and chapters discussing issues such as artists who play with androgyny and even female management – was an absolutely genius touch. This definitely makes this book stand out compared to an array of women and music books, such as Sheila Weller’s Girls Like Us, Julia Downes’ Women make noise and Sara Marcus’ Girls to the front that are on the market.

She Bop is published by Jawbone press and is out now

Video commentary: Memphis Minnie, ‘Ma Rainey’. This video is sound only, and is the celebrated blues guitarist’s tribute to singer Ma Rainey. You can read the lyrics here.

Hayley Foster da Silva is a vegan feminist trying to make the world a better place with words and music through the power of radio. You can catch her show every Monday 8pm UK time on Firebrand Rock Radio Hayley particularly likes grrrls with guitars, cats and filling up notepads.