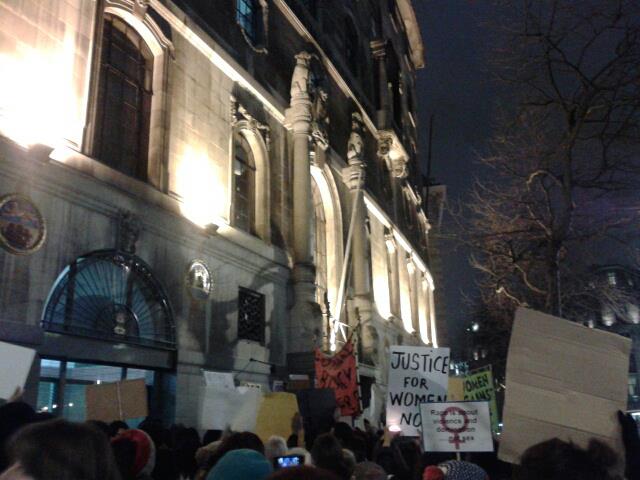 Report back: Protest Against Sexual Violence in India

This post discusses a violent attack on and rape of a woman.

My thoughts are with her loved ones, and with survivors seeking justice and recovery everywhere.

I’ve just come home from attending this evening’s Protest Against Sexual Violence in India, held from 4-7pm outside the Indian High Commission in London. The event had a fantastic turnout and the spirit was excellent – charged, passionate, demanding, constructive.

Organized by SBS (Southall Black Sisters), the protest was held in solidarity with feminists in India who, following the gang rape and subsequent death of Jyoti Singh Pandey on a bus in Delhi on 16 December, are calling for:

As many of you have probably seen, there has been a lot of outrage about this particular rape and murder, much more than the other gang rapes and sexual assaults that happen in India on a regular basis. Indeed, news reports from today are saying that the accused perpetrators will have to be tried in secret because of the attention the case has garnered. Unfortunately, this coverage has (predictably I’d argue) included unhelpful racialized/neocolonial discourses suggesting the rape of women in India is a cultural issue rather than the product of patriarchy, just as it is in the UK.

And, just like in the UK, Indian feminists have been calling for swift and appropriate justice in this case of course, but have also been highlighting the need for a state response that prioritizes *prevention* in the public sphere for all women and girls – emphasizing that we have the right to access public spaces safely now and in the future. As this post highlights, where women and girls are routinely subject to violence and the threat of violence, socieies cannot claim to be ‘peaceful’ and are displaying a relative political instability that should be concerning for us all.

Indian feminists have also been highlighting the problems with pursuing the death penalty as the justice system’s response, one of the proposed ‘solutions’ being advocated.

Finally, one Indian feminist has instituted a petition to India’s Home Minister calling for the immediate prohibition of the ‘two-finger test’ in rape cases. As the petition explains:

We need you to tell the Government of India to prohibit, without any further delay, the misogynist and degrading medico-legal practice of inserting two fingers in the vagina to check if the rape survivor is ‘habituated to sex.’ This practice, inherited by India from colonial times, is nothing but medical ‘re-rape’ of the rape survivor. It contributes to India’s low conviction rates for rape, by allowing the survivor’s past sexual history to undermine her testimony.

Photo of tonight’s protest showing some participants with banners and posters in front of the Indian High Commission in London, taken by me.