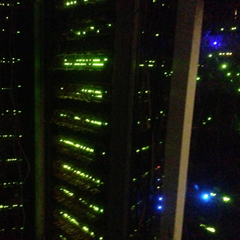 This week’s closing video is “Don’t Want To Know” by John Martyn from his seminal 1973 album Solid Air. There’s quite a nice early 1990s prog-house cover by Spill (Beth Orton & William Orbit) here, but I’ve gone with the original for no other reason than that it’s an ideal soundtrack to a(nother) sleepless night and an almost overwhelming sense of world-weariness:

Image attribution and description: The image at the head of this post is called Blinkenlights and was taken by Helen on her cellphone telephone. It’s a photo of a darkened computer room illuminated by the green and blue lights of active network connectivity devices.