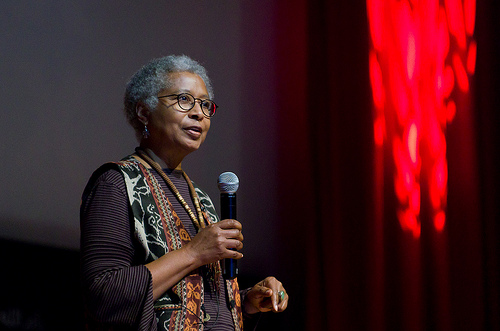 A chance to see the documentary Alice Walker: Beauty in Truth

The much-anticipated documentary about Alice Walker is having its world premiere next month in London. The premiere has sold out, but a second showing has been added the same night, so there’s still a chance to see it on 10 March.

Tickets and further info from the Southbank Centre, which is screening the film as part of its Women of the World Festival.

Alice Walker: Truth in Beauty is directed by the wonderful Pratibha Palmar.

You may remember we ran a piece last year by Lola Okolosie, when Pratibha screened some excerpts from the film when it was still in the process of being edited. I was at that screening too and have been hotly anticipating seeing the final version. As Lola put it:

Walker, who is best known for her Pulitzer prize winning novel, The Colour Purple, does not ordinarily appear in public. Parmar, however, gives us intimate footage of Walker talking about growing up poor in the southern state of segregated Georgia as well as her work as a civil rights activist and does so beautifully. Acting as a counterpoint to Walker’s own testimony are interviews with notable figures in her life: from former husband, Melvyn Leventhal, to Steven Spielberg and Quincy Jones who directed and produced, respectively, The Color Purple (1985). From all these sources, Parmar manages to gain generous contributions to the piece that draws a compelling image of Walker as writer, feminist, activist and woman.

The tickets are sure to sell out fast…

Photo by Lazar Simeonov, shared under a Creative Commons license on Flickr