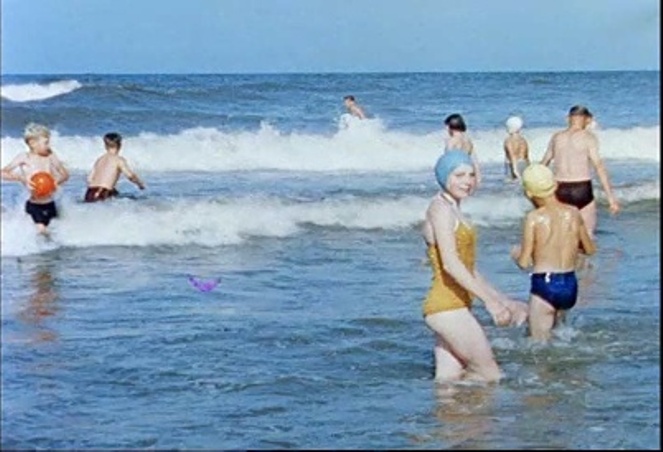 Stories from the sea and beyond

“One of life’s guilty pleasures”, says Penny Woolcock in her DVD booklet essay on making From the Sea to the Land Beyond, “is being safely inside somewhere lovely in the daytime while it’s raining outside, watching wonderful old black and white films while the rest of the world is at work.” It’s hard to top that as a review of From the Sea, which offers the cinematic equivalent of a long walk on the foreshore in changeable weather, looking out over the waves, with the promise of a pint at the end.

If that sounds like a distillation of a particular fantasy of Englishness, then it’s one this archival collage of a documentary is sweetly analysing rather than blithely indulging. Woolcock’s filmmaking has always been gently anarchic, in love with the politics of the everyday and the possibilities of human interaction. Mischief Night and 1 Day both take place in ritual time – a tense mixed-race community over Hallowe’en and a young man racing against the clock – and in exuberant cinematic form. 1 Day may have a storyline similar to any nouveau-gangster flick, but it’s a musical. From the Sea likewise uses music and the abstract beauty of the sea in all its moods to frame its historical points.

As if staring out at the waves of the Atlantic, Irish Sea, North Sea or Channel, you find yourself thinking about the island identity of the United Kingdom

Woolcock was given the free run of the British Film Institute (BFI) archives of government film and the brief of making a documentary about the sea, scored by the band British Sea Power. Inspired by the Central Office of Information work by early documentary makers such as John Grierson who worked with WH Auden, Woolcock takes a poetic approach: one that’s as full of political storms as it is of reflective wavelets.

Similarly to equally absorbing recent archival documentaries such as Bill Morrison’s The Miners’ Hymn and John Akomfrah’s The Nine Muses, From the Sea eschews both descriptive voiceover and manipulative orchestral music in favour of a subtler approach. Montages are accompanied by British Sea Power slowing down some of their most anthemic songs and their way with a tune, often with haunting catches of traditional British folk melodies, does stand out. A short making-of documentary shows the band scoring a rough cut of the film live as Woolcock listens in: that old-fashioned music making is in tune with the film’s focus on communities at work. Taking the stadium out of their stadium rock makes space for the viewer to think.

The passionate, elemental relationship – rather than the contemplative sublime – is the key to Woolcock’s film

As if staring out at the waves of the Atlantic, Irish Sea, North Sea or Channel, what you find yourself thinking about is the island identity of the United Kingdom: both the cohesion it offers for coastal dwellers and the connections that it makes across the sea. Although the middle of the film hinges on the troops, munitions workers and pilots of the Second World War, there’s no sense of a rousing nationalist triumphalism, but more a sense of the changes wrought by global conflict. The “land beyond” of the title does take the viewer inland, but also over. Over the channel to continental Europe, particularly in moving footage of the D-Day landings, and over the map of the world with footage from a newsreel, listed in the archive as Victory Parade, of Commonwealth soldiers arriving in London in 1946 to be honoured by the royal family and Winston Churchill. 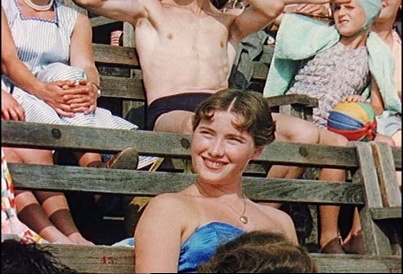 Amid the dreamy strains of British Sea Power and the occasional snippet of voiceover from earlier documentaries or newsreel, the first voice emerging from a person onscreen is that of a Black big band singer recording for BBC radio at a mixed-race military dance. And the last voice we hear in the whole film is that of an older woman struggling against vertical wind and rain in Blackpool, who says joyfully: “I think it’s wonderful!”

That passionate, elemental relationship – rather than the contemplative sublime – is the key to Woolcock’s film. As her selection of footage shows, she’s compelled by fishing and freight hauling, not weekend painters holidaying in Cornwall. But alongside a resilient sense of the continuity offered by the sea, there’s a sense of loss in our disconnection from it as mechanisation, gentrification and communication technology replace traditional ways of life. It’s not only the lazy gawping behaviour of the wealthy tourists traipsing over the Royal Yacht that invites our mockery, but the poor quality of the colour video used to shoot the original footage. Unlike the texture-rich black and white celluloid, it has degraded badly and quickly; the technology mirrors a cultural degradation.

Kerchiefed toothless fishwives, early bathing beauties and female munitions workers alike assert the presence of women at work and play in the first half of the 20th century

Newsreels, British Transport Films and the Central Office of Information offer the filmmaker a trove of depictions of working class life, riches offered to the viewer in a repeated shot of a fish haul glinting in the keel of a boat. Unlike contemporary reality TV or ‘shock docs’, these films cast an interested gaze at labour and leisure, and there’s often a joyful moment when the subject catches the camera’s eye, stamping their authority on the way they are seen.

Kerchiefed toothless fishwives, early bathing beauties and female munitions workers alike assert the presence of women at work and play in the first half of the 20th century. Egg-collectors abseil down cliffs and climbers in trousers, bordering on cross-dressing back then, stump up mountains: the women Woolcock finds in the archive are far from decorative. Mitchell & Kenyon’s 1901 footage of ship workers in Greenock is the oldest in the film and material of a similar vintage shows working women in port communities.But as the film progresses, roughly historically, so women disappear, except as dancers and tourists, at about the same time as colour appears. 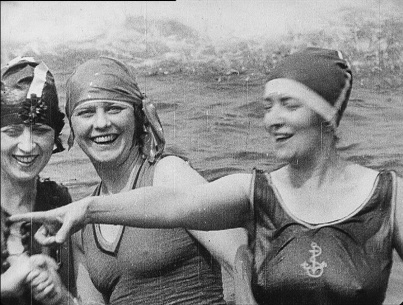 After the factory workers and land girls of Second World War, the 1950s represent a shocking domestication in vivid colour, as colour television appeared in parallel to domestic devices such as the washing machine. Of course women continued to work, but the Central Office of Information wasn’t interested in showing it. Labour films focus on the machismo of now-mechanised dockyards, oil rigs and – in a striking sequence – lifeboat crews.

As with the footage from Victory Parade or a glimpse of newsreel showing a Suffragist march, the lifeboat footage makes its point without thumping the viewer over the head. Here are aspects of national history that should be taught in schools, but won’t be if Michael Gove has his way. Here’s your Big Society in action, for real. While not romanticising the reality of child labour, the film sets the viewer dreaming not of going back to the past, but of incorporating and celebrating its diversity before it’s forgotten.

There’s no guilty pleasure about watching From the Sea although I can well imagine our current overlords banning this puckish, spirited film that engages the viewer’s intelligence, not their chauvinism. And banning (“Oh, we’ll just snip some funding here, and privatise access there”) the BFI Archives that offer such an unlimited, and unlimiting, view of the real British sea power: not the Royal Navy, but the fish-gutting, high-diving, rock-climbing, shipbuilding, ballroom-dancing people who grin at the cameras into whose sharp gaze they jump, as they do into the cold waves of the sea.

From the Sea to the Land Beyond is BFI’s first DVD release of 2013.

All images are stills from the film, courtesy of BFI.

Sophie Mayer is the author of The Cinema of Sally Potter: A Politics of Love, and of two poetry collections, Her Various Scalpels and The Private Parts of Girls. Her latest project, with English PEN, is Poems for Pussy Riot