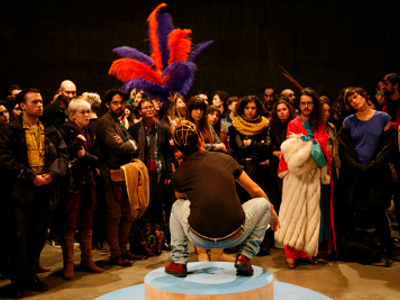 It is the beginning of February and I have rocked up at the Tanks in the Tate Modern to attend Charming for the Revolution, a congress of artists, activists and thinkers who are interested in questioning and subverting contemporary sexual and gender politics. Pink for girls and blue for boys are rejected, along with the insistence on using gender-specific pronouns and traditional ideas of who gets to wear high heels or make-up.

The congress includes live performance, music and films (most prominently, the UK premiere of Wu Tsang’s award-winning documentary Wildness, reviewed for us by Jess), as well as a day-long conference, called Gender Talents: A Special Address.

Attending the conference proves to be a rewarding experience (although spending six hours in one of the underground Tanks was a little overwhelming!). Plinths scattered around the arena are lit up in cheerful colours, surrounded by the audience’s chairs. Resembling a playground, or perhaps Google’s offices, this layout allows interestingly democratic presentations; speakers decide which plinth to stand on and who to turn their backs on in the process, or whether to move about continuously during their speeches.

Tomorrow will be the 22nd century!

Speakers, who range from artists to activists to academics, or any combination thereof, were asked to structure their contributions as manifestos. Some of them stick closely to this format, like Jack Halberstam’s presentation that goes all the way back to the 1916 Dada manifesto by Hugo Ball, while others depart from it. Most contributions are purely academic mini-presentations and so demand lecture-like attention as well as some prior knowledge of the topic; others manage to be more self-explanatory, showcasing activism rather than theoretical approaches. A small number of manifestos (arguably not enough of them) have a more performative and playful feel, especially Giuseppe Campuzano’s ‘travesti manifesto’: a counter-narrative of the pre- and post-colonial history of Peru, narrated in a calm voice, while Giuseppe stands on the plinth in a dress with a prominent feather stuck in his cap.

The symposium was convened by Colombian multi-disciplinary artist Carlos Motta, who is working on an ongoing research and art project called ‘Gender Talents’. Motta’s website describes this as engaging “discourses and movements for gender self-determination within trans, intersex and gender queer communities”. 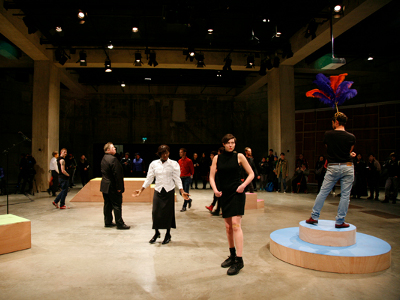 In his opening manifesto, Motta highlights the need for transformation – not only of social norms pertaining to gender, but of the wider neoliberal socio-economic agenda. He exclaims: “Tomorrow will be the 22nd century!,” urging us to reimagine our reality, inverting and collapsing the gender binary. Accordingly, the audience is promised a selection of most radical expressions of sexuality and gender. So how did the conference measure up?

The first part of the conference is a performative version of a queer studies primer. My favourite in this segment is Del LaGrace Volcano’s rhymed piece, ‘Bodies that Queer’, delivered in constant motion to make sure different parts of the audience are faced at some point. Volcano is a pioneer of queer photography and gives a great introduction to one person’s lived experience in a queer body: “I don’t identify as female or male, there’s another twist to this intersex tale.” On the whole, however, this panel charts well-trodden ground and included no surprises (bar some clips from the film Fantastic Mr. Fox, which I haven’t seen before).

If I’m an artist, I’m a con artist

Most controversial of all is probably the speech by Terre Thaemlitz, ‘We are not welcome here’, chillingly alluding to the role of art establishment and art institutions in perpetuating gender norms. Choosing to sit with her back to most of the audience and facing a small group of latecomers instead, Terre questions why the organisers of the event so optimistically assumed there is solidarity in the trans community as well as the euphoric celebrations being encouraged.

“If I’m an artist, I’m a con artist,” says Terre, advising a dose of negativity. 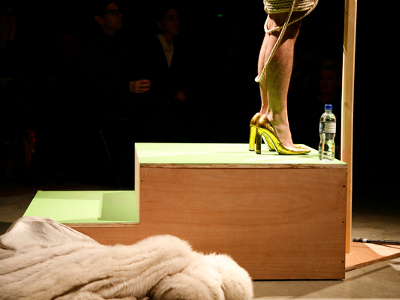 The last panel offers a mixture of philosophical and theoretical approaches and practical activist tips; it was the only one to include non-white participants (although Del LaGrace Volcano self-identifies as “off-white”).

One of them was London-based writer and director Campbell X who delivers a powerful ‘How to love being the outsider – a manifesto for QPOC online creativity’, using examples of video blogs by Queer People of Colour talking about their lives and desires, reclaiming them from “Eurocentric post-colonial imaginings”. “Be sexy and try not to get banned,” is the last word of advice for those using social media.

The final manifesto is a collaboration, not only between US filmmaker Wu Tsang and director of the UK-based Safra Project Tamsila Tauqir, but one that includes everybody in the audience. We are asked to answer questions relating to violence, provided on the cards distributed in the morning. The manifesto read out loud by Wu and Tamsila, concurrently projected on the wall, incorporates some of the answers. One calls for “linking your work to how you feed and house people”.

Does mainstream recognition necessarily imply a loss of critical, revolutionary edge? Is it always a sell-out?

Six hours covers a lot of ground and the speakers approach the day from such different angles, that analysing all the addresses in detail would fill volumes. My immediate impression is one of excitement on seeing the speakers in the arena coming together with the others working in the field, sitting in the audience to listen and share experiences and ideas. It becomes not merely a safe space, a term which resonates with many present, but a friendly and creative one. 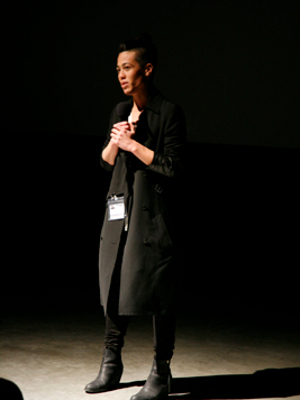 That the event takes place within an established national art gallery is both beneficial and problematic. Recognition, especially if hard to gain, is even harder to overrate; it is a sign of the times that a conference by and about queer and trans artists is hosted by the Tate and is sold out. However, the primer-vibe I mentioned makes the event feel at times like yet another Tate retrospective: not much new is said, even though a major unresolved conflict looms large between the first and second tranche of panellists. A much more important problem with the location is brought up in a straightforward manner by Campbell X, who reminds us how Henry Tate profited from Black slavery in the Caribbean.

Does mainstream recognition necessarily imply a loss of critical, revolutionary edge? Is it always a sell-out? At one point, Terre Thaemlitz wonders whether the emphasis on “gender euphoria” might be directed at potential sponsors, willing to support projects championing optimism and positivity, rather than negative and difficult aspects of queer and trans lives. Wu Tsang and Tamsila Tauquir claim twice: “We’re not interested in recognition. Disrupt queer spaces more closely.”

If manifestos mirror the times they are created in, much has changed since 1990 when the Queer Nation Manifesto was shouted out during the Gay Pride March in New York. The naked anger in that piece has disappeared altogether or been transformed, in some cases into distrust of manifestos, seen now as obsolete tools.

Has queer art and activism come of age, as illustrated by Del LaGrace Volcano’s defence of the choice to be monogamous and married with a child? How can such a stance be squared with the initial call to radical queer and trans politics, rejecting complacency with neoliberal agenda and mainstream society? Every day, global imbalance of power rooted in the history of colonialism and imperialism gets translated into racial inequality in almost every European and American country, complicating umbrella terms like “gender talents”, “queer” or “trans politics” even further.

Paradoxically, I see all these contradictions as signs of rather healthy philosophical and art scene. Ability to articulate antagonistic positions in a non-violent dialogue makes this discourse evolve and brings it close to life, itself ridden with controversies and unresolved tensions. As long as everyone respects all the others they share the space with, Lady Gaga herself can be one trans person’s gender euphoria and another’s bad drag.

All photos from the Congress and taken by Christa Holka, © Tate Film.

Ania is The F-Word’s film editor and she finds reviewing films, as opposed to artistic conferences, less intensive on note-taking