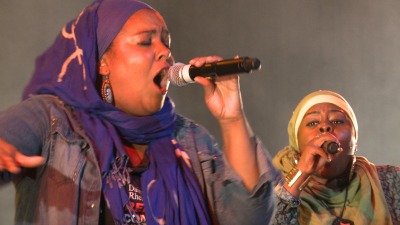 A recent UK parliamentary report revealed that some Muslim women are removing their headscarves and anglicising their names in order to improve their chances in the job market. But two best friends featured in the upcoming documentary film Hip Hop Hijabis did the exact opposite.

Born in Bristol to Jamaican parents, they converted to Islam in 2005, started wearing the hijab and changed their names to Sukina Abdul Noor and Muneera Rashida. Together they are known as the hip hop duo Poetic Pilgrimage. They have toured internationally to critical acclaim, supported K’naan in concert, been featured on the BBC, Channel 4 and Arte and performed at SXSW in Texas and at London’s South Bank Centre, to mention a few.

These two outspoken MCs are as passionate about their new faith as they are about women’s rights. They believe that cultural traditions and misinterpretations have distorted the original egalitarian message of Islam, which emphasised the spiritual equality of men and women and introduced rights to divorce, education and inheritance for women in an otherwise very patriarchal time and place.

However, Sukina and Muneera are up against centuries of deep rooted cultural practices and meet resistance both from within the Muslim community, who may not take kindly to criticism from recent converts, and the secular society they live in, where according to a YouGov poll only 24% of voters believe Islam is compatible with being British.

The good news is that by speaking out against practices such as FGM and honour killings from within an Islamic framework, Poetic Pilgrimage is part of a growing number of Muslim artists, activists and intellectuals reclaiming their religion from the grip of extremism.

But doing so through the language of hip hop has unintentionally become an issue in itself, as some interpretations of Islam consider music and female performance to be haram, or forbidden.

The advantage is that through their skilful rhymes, catchy beats and positive energy Poetic Pilgrimage can reach a wide audience, acting as intercultural bridge-builders and encouraging people of all faiths, and those of none at all, to question assumptions they may have previously accepted unconditionally.

In the context of the women’s movement, the story of Poetic Pilgrimage addresses some very topical questions: Why are nearly two thirds of British Muslim converts women? Considering that the majority of the world’s women are religious, how can their needs be supported by the western women’s movement, which to a large extent has been shaped by atheist and secular feminism? And is it more productive and respectful to challenge misogynist practices from within a religious framework or to fight for that framework to be dismantled?

Judging by the heated debates following recent screenings of the trailer, these are highly controversial questions, which will be explored further in the extensive outreach programme of talks, debates and workshops being developed in association with the film.

Hip Hop Hijabis documentary is shot in an observational style and doesn’t promote any particular view or solution to these complex questions, but aims to foster constructive dialogue about gender equality, religion, extremism and Islamophobia.

It follows Poetic Pilgrimage over three life-changing years, going behind the scenes at major international events, but also showing the private highs and lows as difficult decisions need to be made…

The project has so far been entirely self-funded with the help of a crew of committed filmmakers and in-kind support from Faction Films.

The team is currently crowd-funding in order to complete post-production.

Click here for trailer, perks and more information on the project.The crowd-funding campaign closes at midnight.

The photo of Poetic Pilgrimage performing at the Southbank, London used with permission.