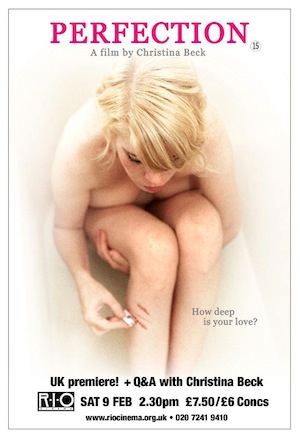 Californian filmmaker Christina Beck wrote, directed and starred in her independently produced film Perfection that tells the story of Kristabelle (Beck herself), a retiring and timid woman living with her shallow and overbearing mother Sally (Robyn Peterson), who tries to escape the too-circumscribed life she has constructed.

Our regular contributor Katherine Wootton attended the film’s UK premiere two weeks ago and shares her impressions with us:

“Beck has a story worth telling, and, as I learned from the Q&A that followed the film, devoted huge amounts of time and effort to seeing it through on an infinitesimal budget while working full time…The most impressive thing about Perfection is her dedication to completing the project. For a first feature, made independently from what appears to be essentially passion and favours, it’s quite an achievement.”