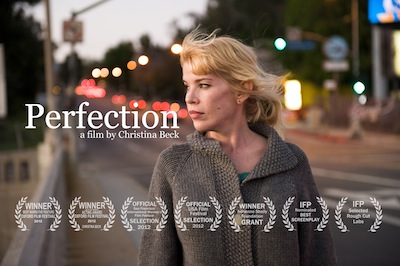 UK premiere of Perfection: this Saturday @ the RIO Cinema, London

A film for those of you based in London and interested in the issue of body image in mainstream culture and how it influences women’s lives and behaviour: Perfection (2012), the award winning feature film by Christina Beck, will have its UK premiere on Saturday February 9 at 2:30pm. The screening will take place at the Rio Cinema (107 Kingsland High Street, E8 2PB) and will be followed by a Q&A with writer, director and actress Christina Beck.

Perfection is set in Los Angeles and delves into Hollywood’s issue with female body image through the eyes of two women, a generation apart, who have developed their own methods for combating their insecurities. The film tells the story of Kristabelle (played by Beck), a 30 something who still lives with her mother and cuts herself to feel alive. Her mother is addicted to plastic surgery, trying to regain her youth. Through the help of a newly sober British stand up comic and Chinese medicine, they all find that love can be more than skin deep.

Christina Beck’s fresh cinematic voice poignantly captures the struggle to find connection and acceptance in an image obsessed culture. Perfection was awarded Best Narrative Feature at the Oxford Film Festival (Mississippi, USA). At the same festival, Christina Beck won the Best Actor award for her portrayal of Kristabelle in the film.

Image is the film poster and shows a blonde woman in a cardigan, looking to the side. Used with permission.