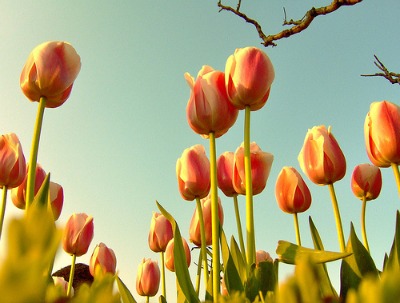 Our regressive, insensitive and cultish attitude to breastfeeding (NewStatesman)

Seriously, is the F-word offensive? I’m proud to call myself a feminist (Guardian, Cif)

The courage of vigilante feminism is contagious (Guardian)

Disablism or Ableism? (If I Can’t Dance Is It Still My Revolution)

Is Ukip a party of bigots? Let’s look at the evidence (NewStatesman)

Fuck the Sun (Another Angry Woman)

Why I won’t support One Billion Rising (Huffington Post)

Why is stopping gender violence a ‘women’s issue’? (Women Under Siege)

Coming out to doctors: is it good for our (sexual) health? (Lesbilicious)

BBC World Service interviewed women around the world and found out how they are perceived – and what sort of attitudes area considered acceptable on a night out.

Picture shows peach and white tulips in the sunshine against a blue sky. Photo taken by Kıvanç Niş, shared under a Creative Comons License.