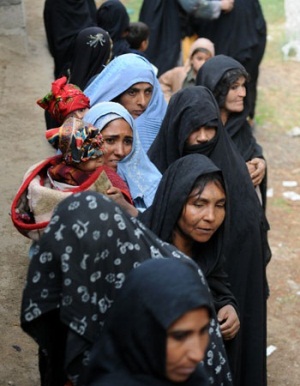 Afghan refugee women in Pakistan: the invisible causalities of the war in Afghanistan

Mahwash Bhimjee highlights the difficulties faced by Afghan refugee women in Pakistan, who will lose their refugee status in June of this year

Mahwash Bhimjee works on policy and campaigns at Gender Action for Peace and Security. Having spent much of her life in Pakistan, she has seen first-hand the dismal situation of Afghan refugee women and recognises the urgent need for change.

When I began to write this piece last week I started off by doing a general search on the Internet for anything I could find on Afghan refugee women. What I found were either articles on how Afghan refugees were soon to be repatriated to Pakistan or ones dating back to the early 2000s on how the livelihoods of Afghan refugee women could be improved by employing them in cottage industries. It seemed to be the case that the data had not just overlooked how the war had affected these women but in fact there was actually very little data on them at all. Given that the NATO troops are to soon withdraw from Afghanistan and vast numbers of refugees are set to return home, a finding such as this seems to be a dangerous one for the fate of Afghan refugee women.

Afghan refugees in Pakistan number about 3 million, making them the largest refugee community in the world. Last year the Pakistani government announced that Afghan refugees would be given six more months, until June 2013, before losing their refugee status and being forced to move back to Afghanistan. For many refugees Afghanistan is less like home and more like a far away land left with little hope and few economic prospects. According to a survey, 80 percent of Afghan refugees in Pakistan have no intention of returning home. Howeve, losing refugee status in Pakistan means that the vast majority of Afghans will become illegal immigrants, deprived of access to employment and basic services. Pakistan is an aid dependent country, hardly able to provide for its own citizens, and thus housing Afghan refugees during the war has also been economically taxing for it.

Life for Afghan refugees has not been easy in Pakistan. The UNHCR has found that less than one quarter of them are employed and almost three quarters of children do not attend school. Women refugees are the worst off as a combined result of their gender and refugee status. Becoming a refugee means losing legal and social status and also the traditional community-based structures, which have often protected women. Due to this, refugee women are vulnerable to trauma, sexual violence, deepening poverty and an increased burden of care work. According to an estimate, one-third of Afghan refugee women are widows, yet little is done to address their special needs. Tribal and political leaders also restrict women’s mobility in a new ‘alien’ land, meaning few women are able to go out in search of employment or better opportunities. Women’s voices are missing from policies around the formation and planning of refugee camps despite the fact that women account for seventy-five percent of the refugee population.

Although the reality for Afghan women refugees is unfortunate, there still lies some hope. Many Afghan women have stood up in the form of community leaders and human rights defenders, providing services for refugee women and teaching them about their rights. Fatana Gailani is an example of such a woman. She runs the Afghanistan Women Council that provides medical care, education and employment to Afghan refugee women in Pakistan. As part of this she runs the Ariana School in Peshawar, which provides education to over 2000 Afghan boys and girls and employs 65 Afghan women as teachers. The Afghanistan Women Council also runs a maternal health clinic to serve the needs of Afghan refugee women and children. Given that 3 out of 10 children under the age of five face malnutrition and maternal mortality is extremely high, the need for a service such as this is vital. The organization also runs a monthly journal, which provides information on human rights abuses in Afghanistan and on refugee conditions in camps. It promotes ideas and solutions to problems faced by Afghanistan as proposed by national personalities, academics and intellectuals. Through this journal the organization raises awareness of the plight of women and children in the camp, aims to protect women’s rights, and mobilizes women to participate in the peace process.

Although groups such as The Afghanistan Women Council are important, they are not enough. Women refugees have now become the invisible casualties of the current conflict in Afghanistan and this must change. Both the Pakistani government and the Afghan government must pay attention and respond to the specific needs of Afghan refugee women. Civil society organisations too should address their differential needs when creating programmes and providing services. Women refugees should also play a role in international and UN sponsored peace initiatives and in government policies around post-conflict rebuilding. Lasting peace in Afghanistan cannot be achieved if Afghan refugee women continue to be left out of peace-building and reconciliation.

Photo of Afghan refugee women standing in a queue, wearing black and blue head scarves and some carrying children, by isafmedia, shared under a Creative Commons licence.